Brian Scalabrine Weighs In On The Rapaport Vs. Durant War Of Words: Bro Code And The Sensitivity Of Current NBA Players 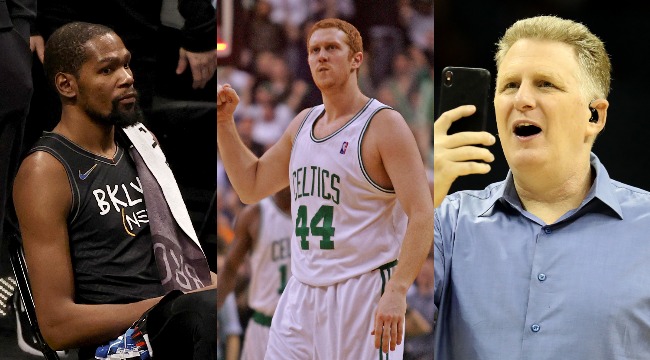 I don’t think I’m telling tales out of school here when I say that Kevin Durant is easily unhinged by basement-dwelling virgins manifesting their frustrations through digital barbs. We’ve known this, yet KD bites the toxic fish hook time and time again, perpetually losing sleep over the opinions of sheep.

Speaking of white amorphous creatures, Michael Rapaport has been known for calling people he doesn’t like p*ssies in an *extreme Brooklyn voice* on Twitter, and should understand the rules of engagement better than to out private DMs, of which he himself called KD a “hooker” “ho” and “p*ssy.”

Is this a classic tale of two people bringing out the worst of each other?

We spoke with the White Mamba aka Brian Scalabrine, a friend of Michael Rapaport’s, on our Endless Hustle to get his take on the entire messy saga and believe it or not, two people can be wrong at the same time.

White Mamba @Scalabrine weighs in on the @MichaelRapaport vs. @KDTrey5 war of words, and the publicizing of private conversations.

On Rapaport airing out KD:

“Private conversations have to remain private. Michael Rapaport’s a really good friend of mine…I was a little bit disappointed that Rap did that because some of the stuff that Michael Rapaport says and puts out there is kind of ridiculous right?

…When I talk to him again, and hopefully it’s on camera, I’m going to call him out for that. That’s like a Bro Code, man. You don’t do that.”

On the sensitivity of current NBA players:

“I do think that NBA players are a little bit sensitive nowadays. Kevin Durant, as accomplished as he is, I don’t see why you’re bothered by anything. You’re living your life. You’re doing what you want to do. You want to go to Golden State and win two championships and be the MVP and be the best player on that team? You have the right to do that. And whatever people say it doesn’t matter. You don’t care about legacy or anything like that, that’s all for other people to talk about. I don’t know why NBA players do get caught up in the social media game.”

Before the social media days, you were forced to insult a human being to their face, now trigger fingers turn to Twitter fingers and Billy from Toledo, Ohio is capable of ruining the day of one of the greatest players of all-time. We’ve created this monster. Someone just needs to tell KD he doesn’t have to fight it.