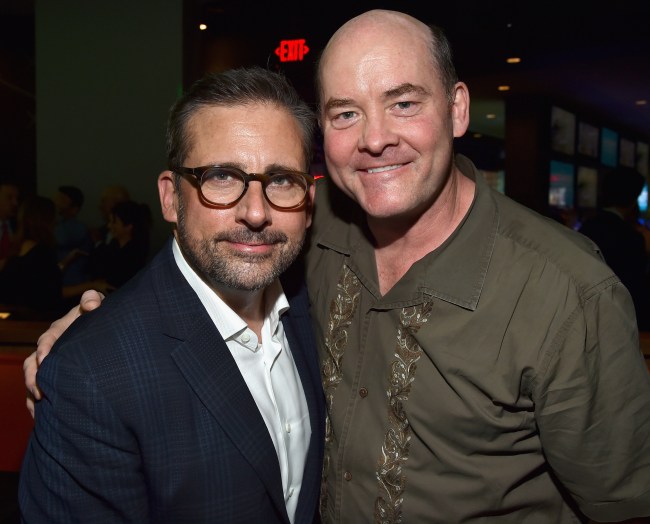 Anyone who isn’t under a deadline right now owes it to themselves to watch this 8-minute Todd Packer sizzle reel and try now to urinate down their legs. I made it to the 4:40 mark before breaking the seal. I’m a sucker for someone cutting Kevin down to size (pun!) because there is never a good reason to hurt a person that nice.

Of the little going for me, I enjoy a life where I get to talk to people like Packer, born David Koechner, and get a W-2 for it. Koechner, who has a new Valentine’s comedy The Right One is out now, joined our Endless Hustle podcast presented by Boston Market to talk about everything from his iconic roles in landmark comedies over the past 20 years to his Kansas City Chiefs to operating a vehicle with no pants on.

Quick sidenote: Koechner’s IMDB sneaky reads like All Eyez On Me.

Here’s Koechner talking about how Steve Carell reached out to him after The Office producers were having trouble finding a man who was capable of living the essence of Todd Packer, toeing the line, and why the show closed the curtain on one of the great sitcom comedies of all-time.

.@davidkoechner on how Steve Carell helped him land the role as "emotional hand grenade" Todd Packer in The Office & why he likens the role to a nice warm bath.

Listen to our @endless__hustle chat with the hilarious Koechner: https://t.co/6hUU7xhJTh

“You can’t speak to anyone in life like that and get away with it. I couldn’t. I couldn’t live with myself. So I liken that role to being in a nice warm bath. You get to splash all the water out of the tub and when you get out, you’re completely dry and walk away. He’s an emotional hand grenade. There ya go, ‘Boom! Bye!’ So that was a lot of fun.

Steve Carell actually recommended me for the role. I was up in Canada shooting Snakes on a Plane. You’re welcome. And they were having some trouble casting the role and they had already shot part of the episode and so Carell goes ‘How about Koechner?’ because I’ve known Steve since Second City back in Chicago. So I’ve known Steve since the early 90s.

So the point is to make this guy so awful that it’s making fun of guys like that. Sadly there are people out there going, ‘Yeah! Cool! Right, Packer. The best!’ No he’s not the best. He’s the worst!

It’s amazing to me that Packer’s as popular as he is. I only did two episodes a season. You don’t want too much Packer.”

Koechner then said he doesn’t see how The Office would come back for a 10th season, unless producers were capable of getting a 10 episode commitment from everyone—which is a challenge seeing as Carell, Kasinski, and Rainn Wilson are the busiest.

“So, if there schedules open up, I can

Hope is always a good place to sign off.

BONUS CLIP: The genesis of Wake Up, Ron Burgandy?

But did you know that there's a SECOND #Anchorman movie called 'Wake Up, Ron Burgundy"?! @DavidKoechner tells us all about it on Ep. 31 of @BroBible #EndlessHustle, out now: https://t.co/GUlOMB2mLr

Listen to our entire interview with the hilarious Koechner below. We also speak with NBA 20,000 point scorer, B1G3 winner, and a guy who made Paul Pierce crawl on all fours with a crossover, Iso Joe, Joe Johnson.