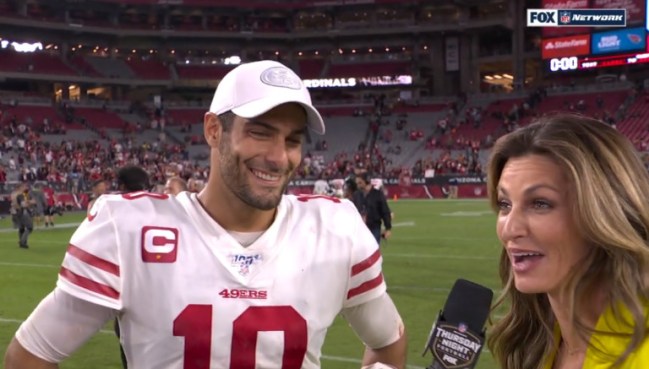 Jimmy G just shepherded the San Francisco 49ers to a perfect 8-0 start after beating the Cardinals on a nationally televised Thursday night game, less than one year after signing the largest contract in NFL history.

Dopamine floods his brain during a post-game interview with Fox broadcaster and married woman Erin Andrews, who asks him how undefeated feels, and the Eastern Illinois product drops the most famous “baby” since Justin Bieber’s 2010 smash hit of the same name, featuring Ludacris.

The QB of the UNDEFEATED San Francisco @49ers!

The ‘baby’ drop is one thing, the Lloyd Christmas ‘Goodbye my looooove’ takes it to a whole other level. 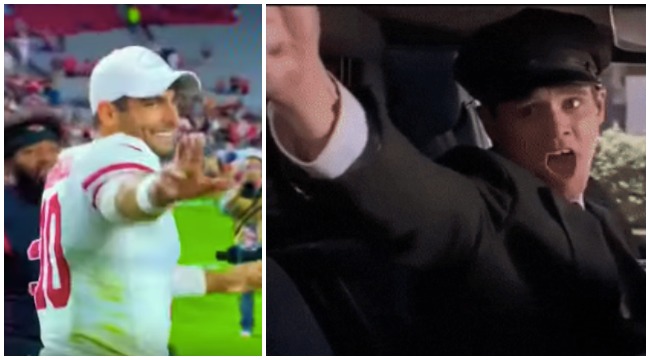 Fifteen months after the viral incident, we sat down with Andrews on our Endless Hustle Podcast presented by Boston Market to chat about that fateful day, and how her two-time Stanley Cup champion husband felt about it.

"Feels great, baby."@erinandrews relives the famous Jimmy Garoppolo post-game interview from 2018 and if there was any spousal discomfort from her husband @jarretstoll.

“Not sure if anyone knows this. My husband was on the field when it happened. He was behind our camera guy on FOX holding my phone taking a picture. Jimmy G knew my husband was right there.

Again, I’ll take it, but he wasn’t throwing game my way. Forty two years old. Sure, I’ll take any of it. No, it’s just an expression of like ‘baby’ or ‘babe.’ You watch all those Mic’d Ups with Brady, he says ‘babe’ all the time. One of my favorite things is when Edelman or Gronk does the TB ‘Hey babe.’ And I think that’s maybe where Jimmy got it from.

I reached out to [49ers General Manager] John Lynch because he was a co-worker of ours at FOX and I just texted him and said, ‘I hope you know I’m good. That’s not what he meant. I get it.’ He goes, ‘I know you’re good.’ Because I don’t take things like that that serious.

Again, Jarret was standing right there on the field. My husband was so pumped, he was like, ‘Hey I’m taking pictures!'”

When I projected my own insecurities and claimed that I’d be self-conscious if my wife was baby’ed by Jimmy G and that chiseled jawline, she reminded me that Jarret Stoll has an elite jawline as well.

Check out our very fun interview with Erin Andrews below. We discuss:

Did you know @ErinAndrews has a new clothing line with @Fanatics called @WEARbyEA? Female sports fans can now support their favorite teams in style!💯