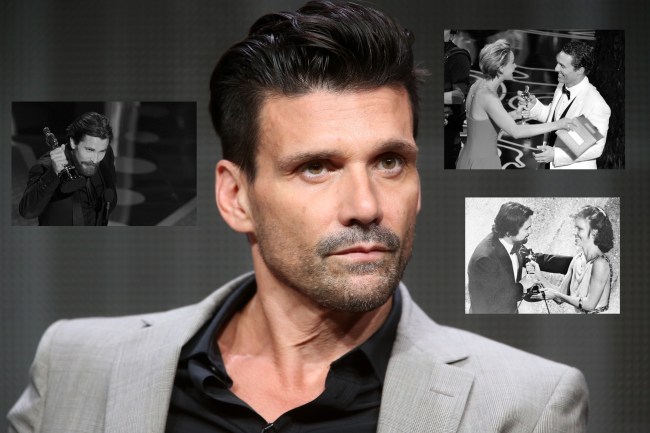 In the time it took you to read this, Frank Grillo has already lost a body fat percentage point.

Grillo, whose new movie Boss Level is out March 5, maintains a cartoonish 5% body fat, making him arguably the most in-shape 55-year-old who isn’t named Elizabeth Hurley.

The actor knows a thing or two about the discipline required to achieve a certain physique, so we asked him on our Endless Hustle podcast who’s on-screen commitment has impressed him most.

Ironically, he answered drinking a can of White Girl Rose, which contains 206 calories and 4.5 grams of sugar aka devil powder and is what my wife drinks during The Bachelor. And by my wife I mean me.

Frank Grillo, who maintains 5% body fat at 55 years old, reveals his list of most impressive actor body transformations of all-time.

“McConaughey in Dallas Buyers Club kind of frightened me because he got so skinny. There’s a saying: don’t sacrifice your face for your body. And I don’t think he ever recovered fully. He’s a beautiful guy, but I don’t think he recovered from the amount of weight loss that guy endured for an entire film.”

The harder the fight, the sweeter the reward.

“Bale is famous for doing it. And I think he said recently he’s kind of done with it.”

Ladies, find you a man who can do both.

A thread of the greatest Body transformations in movie.

Went from 180 pounds to 110 pounds while only eating a can of tuna fish and apple once per day for 4 months.#SpinnMovieSpot pic.twitter.com/cAcDdFvmHl

Happy birthday to Christian Bale and Dick Cheney. (No joke. They have the same birthday) pic.twitter.com/Qixjnb4Flh

“And then the other is De Niro in Raging Bull. I mean, he got fat. And that wasn’t the end of the movie. And then he had to lose the weight again.”

If you told me all I had to do to win an Oscar was to get fat and then skinny, I’d just get fat and settle for a nomination.

Robert De Niro wins Best Actor for RAGING BULL at the 1981 Oscars. His second after The Godfather Part II. pic.twitter.com/XgkpnFzLeV

“It’s incredibly unhealthy. Even when you’re wrestling when you’re younger, you could only drop two weight classes. I would go from 180 to 134. It’s incredibly damaging to your body to fluctuate that much in weight. So it’s a scary proposition.”

Grillo made a solid case for McConaughey, Bale, and De Niro, but if I may I’d like to add one more contenders to the mix.

Listen to our entire fascinating Endless Hustle interview with Grillo below. We chat about: