Harry Lennix Describes Meeting Henry Cavill For The First Time Before ‘Man Of Steel’: ‘As Far As I’m Concerned, He Should Retire With The Role’ 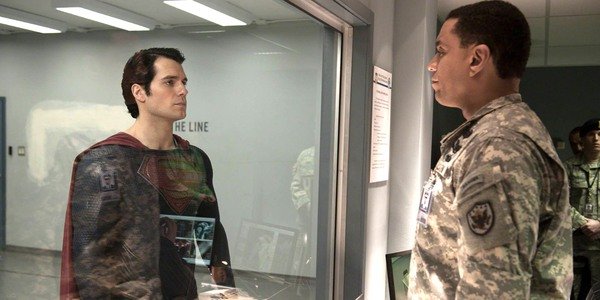 Before Henry Cavill starred as the most iconic figure in film, or was named “World’s Sexiest Man” by British Glamour Magazine, he was just a dude in a mini-trailer on a gravel lot shaving. Like a normie.

Harry Lennix, who would go on to play General Swanwick in Man of Steel, had no idea who Cavill was when he was called in to help Zack Snyder assess auditions for the role of Superman, but that changed within seconds of arriving on the lot in the hills of Santa Monica as the sun was rising.

Harry had just been dropped and done dirty by his talent agency after the sci-fi series Dollhouse wasn’t picked up for a third season in 2010, so he was over the moon to help contribute to the re-boot.

“The agent didn’t even have the courtesy to call me directly. They made my manager, a girl I went to school with, call me and tell me I was no longer wanted.”

Lennix, aka Martian Manhunter in the Snyder Cut, appeared on our Endless Hustle show to re-live that grand and fateful morning a decade ago.

"Zack Snyder, Henry & me sit down…5 seconds into it I was like, 'They don't need to look at any other person on the planet to play Superman but this guy right here.'"

“I go up to the Santa Monica mountains. They have all these secret little signs that say stuff like Rhinoceros, little code words and you follow the code up the mountain to the secret destination. And I pull up to this gravel pit lot and I see a guy in a honeywagon. This is a tiny little room that they have for actors who are day players. No big trailer or anything. Just a tiny little honeywagon.

And I see this dude’s that’s YOKED shaving in the mirror. I said, ‘That’s gotta be Superman!’ I didn’t know Henry Cavill at the time. I should have. He finishes shaving and Zack Snyder, Henry Cavill and me sit down for breakfast. We talk about the shots that we’re going to be doing. The sun is rising and everything. Five seconds into it, I was like, ‘They don’t need to look at any other person on the planet to play Superman than this guy right here.

I grew up a teenager looking at Christopher Reeve, who was a wonderful, wonderful Superman. Very iconic. And Henry was wearing his suit. A suit that was made for the great Christopher Reeve as Superman on that day. As far as I’m concerned, [Henry] should retire with the role. I think he’s fantastic.”

How can WB look at Henry Cavill and be like “nah let’s get someone else to play Superman” 😕 pic.twitter.com/LLucPzcMlo

Check out our full Endless Hustle interview with Harry Lennix (and MMA legend Georges St-Pierre below) and BroBible’s entertainment podcast Post-Credit Podcast for more content insightful commentary about the movie world and beyond.