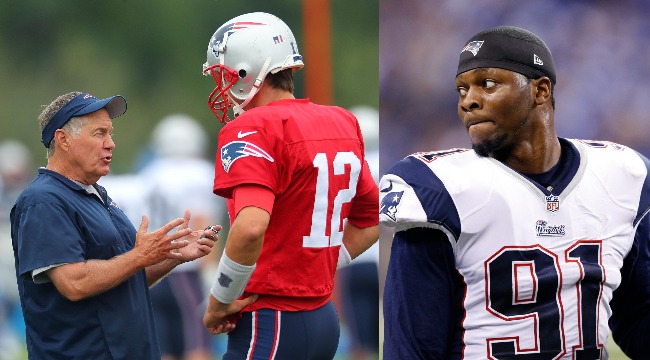 Jamie Collins is a better man than most.

In 2016, Bill Belichick thanked his Pro Bowl linebacker by shipping him from a Super Bowl-bound Patriots team to a one-win Cleveland Browns team in the middle of the season.

Collins would ultimately sign back with the Patriots in 2019, but not before surrendering two Super Bowl wins while drowning with the Browns.

This degree of ruthlessness is something the now Detroit Lions linebacker was accustomed to in his five combined seasons in New England, and said as much on our Endless Hustle podcast (presented by Boston Market).

"No one's safe when it comes to Bill Belichick."

Ex-Patriot Jamie Collins remembers Belichick verbally assaulting Tom Brady over a simple miscue & why The Patriot Way is not for everyone.

“We were in a meeting room one day. He ripped Tom [Brady] so bad…He dropped the snap one day in practice. Man, when I say that was the worst day in that meeting room that morning—‘We can’t even fucking take the snap! The fucking QB is changed!’ It was crazy. He literally threw so many F-bombs. I’m sitting there like, ‘Damn coach, he just fumbled a snap in practice. We can fix that. That’s nothing.’ But he really crushed him. There was no room for error that day…I was so scared, but that’s him. No one’s safe when it comes to Bill, that’s what makes him great.”

While Collins claimed that every NFL team has it’s own restrictions and discipline tactics implemented, New England is a horse of a totally different color.

“A couple teams I went to like Cleveland and Detroit, you can go in there and have fun, but in New England it’s strictly business. You got to enjoy the game. This shit is tough. Can’t be on edge all the time, that kills. I feel like if you don’t enjoy it then you should just hang it up, because there’s going to be times there where it’s really rough.”

When I asked Collins in what ways specifically New England presents a bigger challenge, he said:

“The attitude. The meetings. The discipline. The thought of having an imprint on them as far as Bill Belichick and Mr. Kraft. I just feel like it’s more of a respect thing when it comes to stuff like that, when you meet a guy like Bill Belichick versus meeting a Matt Patricia that’s new to a Detroit Lions team.”

It will be interesting to see how the rigors of the Patriot Way hold up when players aren’t guaranteed a pot of gold at the end of the rainbow. For a franchise that hasn’t drafted particularly well and ah yes, no longer has the greatest football player of all-time, employees may rise up against the Sith Lord after a Week 6 loss to Cincinnati.

Listen to our entire Endless Hustle interview with Jamie Collins below. We discuss:

This episode also contains a conversation with UFC superstar Tyron Woodley, which is sizzling on its own.