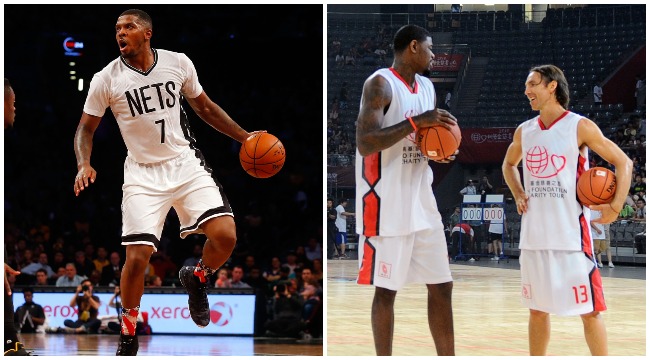 The 39-year-old’s body is still in prime shape after 18 durable seasons in the NBA (huge hot yoga guy), evident in him being one of 14 players selected for USA’s AmeriCup with fellow former All-Star Isaiah Thomas.

BenJoeman is just one in 46 players in the history of the NBA to score 20,000+ points, a feat he achieved while playing alongside league-wide stars like Paul Pierce, Steve Nash, Shaquille O’Neal—while also making more money than them. (He is the 17th highest-paid player in the history of pro basketball).

Mr. Johnson joined our Endless Hustle podcast presented by Boston Market to give his thoughts on the Brooklyn Nets, a franchise he spent five seasons with in the meat of his career after growing up in the league playing alongside newly-minted Nets coach Steve Nash.

At the time of this writing, the Nets are 14-11, KD is in the midst of a seven-day COVID-19 quarantine, and Nash has recently decided to “embrace everything that’s thrown at us and to expect or even ask for it all to be thrown at us.”

Former @brooklynnets star and Steve Nash teammate @thejoejohnson7 talks about the basketball IQ of Nash and the challenges of leading that many superstars.

“You could see the coaching abilities in him from his point guard instincts and just how he approached the team. I don’t even know this personally, but I think he’s probably a great player’s coach just from playing with him. Knowing his demeanor. Knowing who he is as a person. I’m sure those guys cut for him. They’re going to do whatever they can to get things right in Brooklyn, and I think they will.

“I’m sure it’s tough. He probably didn’t want it to happen just so he didn’t have to deal with it. I know that’s a tough situation because you got to coach them. You got to be equal, but at the same time you want them to be happy. I just feel like it’s going to be a tough task throughout the year, unless Kyrie, KD, and James take it upon themselves to do whatever it takes to win.”

Iso Joe went on to say that if they can navigate through the growing pains, the Brooklyn Nets will be “scary” when they find their rhythm. I’d have to agree.

"You get one body. You got to take care of it and that's what I do." – @TheJoeJohnson7 tells us his secret to success and invites us to a hot yoga class on the new episode of #EndlessHustle.

Listen to our entire interview with Johnson on the backend of our Endless Hustle double-header with David Koechner of Anchorman and The Office fame.