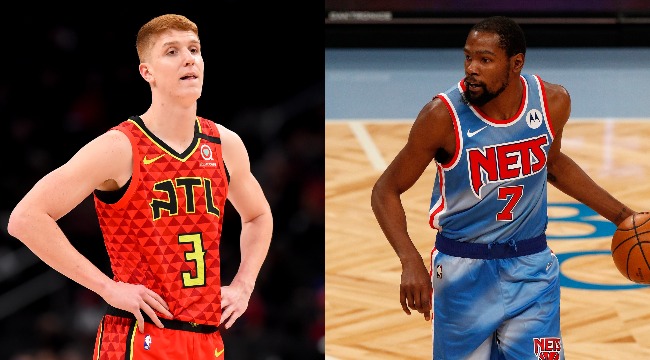 Kevin Huerter was born in 1998 and is now a rising star for the Atlanta Hawks, if my fellow 30+ dudes want another harsh reminder of their mortality.

The 22-year-old University of Maryland product commonly known as Red Velvet is putting up respectable numbers for Atlanta, averaging a shade under 12 ppg and leading the team in steals and deflections in his new role as a starter. Not bad for a dude who declared for the 2018 NBA draft without an agent because even he wasn’t sure if there was a place in the league for him.

Huerter joined our Endless Hustle podcast to discuss his ascension to the NBA and a particularly traumatizing rookie experience which signaled loud and clear that the NBA was a horse of a different color.

Kevin Durant trash-talked a rookie @KevinHuerter and even Huerter's teammates couldn't contain their laughter. This league!

“I think my biggest moment, and this was my Welcome to the NBA moment, I was guarding KD when he was in Golden State. It was like my third or fourth possession after checking in and he hit like this two dribble pull-up jump shot on me where I thought I was playing good defense. He kind of bumped me off and hit a little KD leaner, fadeaway thing. And as he’s backpedaling back on defense, he just yells out in the middle of the game, ‘Welcome to the league, Rook!’

I remember Taurean Prince, we were running back on offense and he couldn’t contain how hard he was laughing. He was just dying going back on offense. And we got to the huddle and he was like, ‘Did he just ‘ROOK’ you in the middle of the game?'”

Here’s the play in question:

“I’m guarding Durant. He loses the ball and it goes out to half court. I’m thinking I’m doing alright. Then he takes a three dribble hesi pull up and knocks down the easiest two. He’s backpedaling on defense and yells out ‘welcome to the league rook!’”

Listen to our entire Endless Hustle interview with Huerter below!