‘The Mandalorian’ Recap And Review: “Chapter 14: The Tragedy” 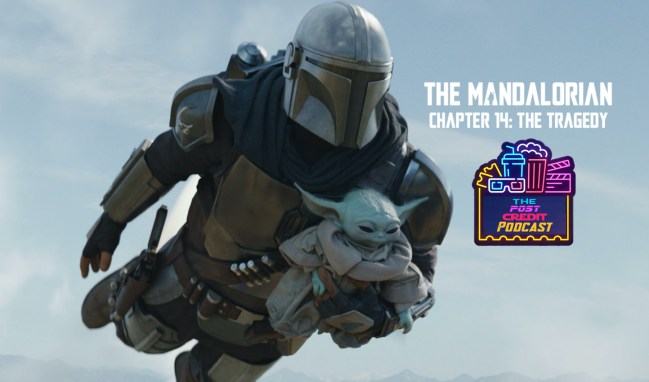 After coming off the high last week that saw The Mandalorian introduce the first-ever live-action version of Ahsoka Tano, I had my doubts that this week’s entry — “Chapter 14: The Tragedy” — would be able to repeat the same level of excitement. Thanks to the veteran action chops of director Robert Rodriguez, though, Chapter 14 actually upped the ante and perfectly positioned season two to close out in hyperdrive.

The Mandalorian “Chapter 14: The Tragedy” Recap

Picking up right where last week left off, after an adorable father-son bonding moment in the cold open that sees Mando let out his first-ever laugh, the boys arrive on Tython to Baby Yoda can sit on the seeing-stone at the Jedi temple, which will hopefully attract the attention of another Jedi. From that, Grogu will be able to choose his path, as Ahsoka Tano suggested last week.

As Grogu starts to channel the Force, a blue protective energy field forms around him that is so strong Mando gets sent flying back when he tries to grab Baby Yoda out of it. At this point, Mando notices the arrival of Boba Fett, so he descends the mountain to buy Grogu some time to do his Jedi thing, or whatever. This scene plays up the comedic aspects of Mando’s confusion with the Force and its hilarious. He literally asks at certain points “does this look Jedi to you?” and “this is the seeing-stone, are you seeing anything?” just like any Dad would. Strong Dad Energy here from Mando.

Mando cluelessly trying to figure out if a rock has an on-button. Major Dad Vibes.#TheMandalorian pic.twitter.com/gxwAiLqMiY

Boba Fett, along with mercenary Fennec Shand, whose life he saved on Tatooine back in season one, and demands the return of his Mandalorian armor, telling Din that it was originally the armor of his father Jango Fett.

After a brief yet tense Mexican standoff, Mado agrees to trade the armor for the safety of Grogu, which immediately becomes in question as two Stormtrooper-carrying shuttles arrive. The trio then join forces to protect Grogu, mowing through dozens upon dozens of Stormtroopers before Moff Gideon, from the comfort of his Imperial Cruiser, destroys the Razor Crest and dispatches his newly-created Darktroopers, who finally get their hands on Baby Yoda. Boba Fett attempts to stop them in his ship, but he’s too late, as the Cruiser jets off into hyperspace.

While the episode was a wall-to-wall thrill ride, one major complaint I do have is that Mando — after clearly using his jetpack to fly down to the Jedi temple — instead opts to run back-and-forth between Baby Yoda and battle, thus resulting in Grogu’s capture. The episode, at the very least, had to at least explain why he didn’t use the one tool that would’ve reduced his travel time and could’ve been the difference in protecting Baby Yoda. Nevertheless, Boba Fett and Fennec then agree to help Mando rescue until Grogu is safe once again.

In the episode’s final moments, we’re on Gideon’s Imperial Cruiser, where Baby Yoda is giving two Stormtroopers an absolute ass-kicking with the Force. Gideon, impressed with the Child’s powers, taunts Baby Yoda with his Darksaber before sedating and cuffing him. He then sends to inform Dr. Pershing that the donor, once again, is available for experimentation.

If Mando was a football coach, he’d be fired after this one.

For the “Awww” moment of the week, while the entire cold-open where they really ham up the fledging father-son relationship between Mando and Baby Yoda, the obvious choice here is the quick glimpse of  Mando carrying Grogu has he jetpacked down to the Jedi ruins on Tython. 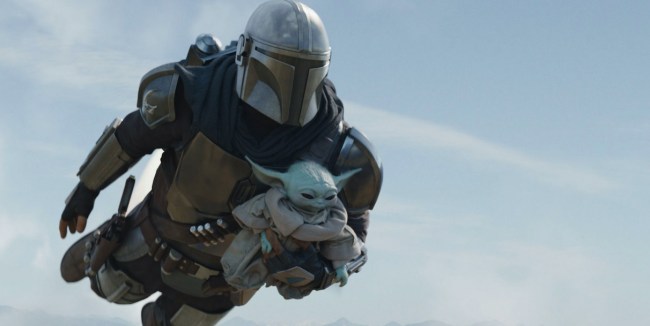 As for the “Holy shit!” moment of the week, we’ve got another obvious selection, as it comes when an obviously very pissed off Baby Yoda is absolutely brutalizing those two helpless stormtroopers with the Force at the end of the episode.

The planet this episode takes place on, Tython, is considered to be one of the most historic Jedi locales, similar to Ahch-To and Jedah. The big question Baby Yoda’s blue beam session on Tython raises is which Jedi could’ve possible heard his call.

This entire episode is essentially one long fight scene, so if I had to choose on specific moment, it’d be Baby Yoda’s aforementioned ass-kicking of those two Stormtroopers, or essentially any of the combat moves Boba Fett pulls, particularly that wicked knee-cap cannon he uses!

As we know from Season One, Din’s sigil is that of a Mud Horn. Conversely, as we see on his armor, Boba Fett’s sigil is a Mandalorian crest, the Fett family clan symbol, which represents honor.

The director, Robert Rodriguez, absolutely crushes this week, as it arguably topped the action-packed highs of “Chapter 13: The Jedi”, which featured the seismic live-action debut of Ahsoka Tano.

With Boba Fett and Fennec now in tow, I think Mando recruits more of his homies — Cara Dune, Cobb Vanth, Bo-Katan, etc. — to help him squad up and raid the Empire cruiser that’s holding Baby Yoda. Also, as noted last week when we were discussing Chekhov’s Beskar Spear, Mando’s spear was the only thing to survive the destruction of the Razor Crest, further cementing my prediction that he will use that very spear to duel with Moff Gideon and his Darksaber.