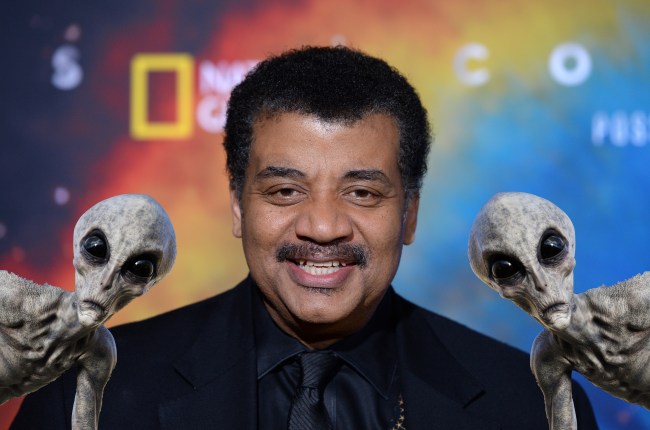 Fermi Paradox: The apparent contradiction between the lack of evidence for extraterrestrial civilizations and various high estimates for their probability.

The ubiquity of cell phone cameras are making this question harder to answer for people championing 2004 Pentagon footage shot with a shoebox as best evidence.

It’s nearly impossible to believe that we’re alone in a 93 billion light year universe, but it’s near impossible to explain why E.T. hasn’t yet strolled into a Wendy’s or performed a surprise set at Coachella. Are we just not pretty enough? Is it our stinky atmospheric gas from our Wendy’s frosty? What gives?

We invited the foremost authority on the Universe on our Endless Hustle to get his take on the confounding extraterrestrial paradox, and somewhere Bob Lazar is shedding a single tear.

FERMI PARADOX: The apparent contradiction between the lack of evidence for aliens & various high estimates for their probability.@neiltyson on why we shouldn't be so eager to meet our ET friends is sobering.

Tyson, whose new Cosmic Queries book just become a #1 best-seller, begins by explaining how mathematically, given the universe’s 10-14 billion year lifespan, aliens should already be chillin’ in Cancun for spring break right now.

“Let’s say we figured out how to travel to planets on a nearby star. So that would be Alpha Centauri system, four light years away. Let’s say we travel one-tenth the speed of light, so that would take 40 years to get there. You then pitch a tent and reproduce. And then you make factories and you make more rockets and now you get to go to two planets. And then they create civilizations and they go to two planets each. So you go from one to two to four to eight, and this doubles.

So if it takes 40 years to double, you can say to yourself, how long would it take to explore every inhabitable planet in the galaxy as you planet hop? The galaxy is 100,000+ light years across. That’s not very large if you just went four light years…the universe has been here for 10, 14 billion years! So a simple exploratory plan, if you have the ability to do it would populate every planet in the galaxy in far less time than the universe has been around.

If any alien had this ability, they should already be here. So where are they? That’s the Fermi Paradox.”

Tyson then offers a dire note of caution to those desperate for an Arrival, using the European colonization craze beginning in 1500 as a point of reference.

“Maybe they did crack the barrier but whatever the urge is to want to colonize another planet has writ within it it’s own self-destruction. So it’s fine at the beginning—you go there and I’ll go here. We each have a planet. Then we start doing this again. All the sudden you encounter each other again for a planet you both value. And I want it. No you want it. Then you fight over it. And the entire colonization movement ends up bringing itself to a halt, imploding. Because the urge to colonize is counter-indicated in success of whether you accomplish this.

Imagine a universal offering of extraterrestrial creatures of all shapes, sizes, and capacities killing themselves on and giving humans a clear path to the end zone. Mutually-assured destruction for a species who still listens to Daughtry. God has a sense of humor.