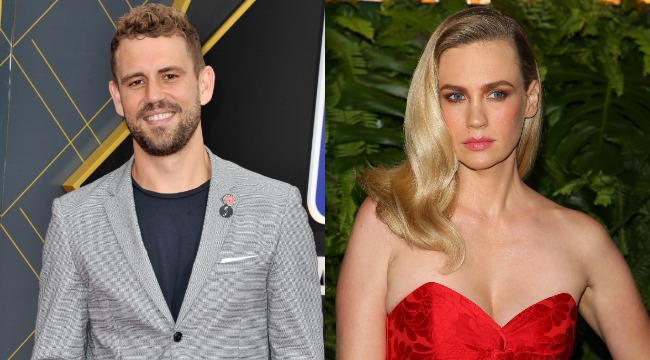 Before Nick Viall enjoyed the sweet nectars of Bachelor fame, he was just a kid from Wisconsin who was mesmerized by Betty Draper like any reasonable human being.

At that point, deluding himself with the fantasy of dating January Jones was a fool’s errand, and I’m sure if you told him then that a decade later she’d use prime minutes on late night television to talk about him (while sitting next to Samuel L. Jackson no less), he would have asked you what you slipped in his drink.

But that fateful night on The Late Late Show in 2017 resulted in a DM hail mary, which resulted in an unlikely fling that Young Nick’s brain would never even bothered dreaming up.

Viall, now host of the wildly popular Viall Files podcast, joined our Endless Hustle to talk about the saga when responding to the coolest moment he’s experienced since his 2014 debut on The Bachelor franchise.

We all have celebrity crushes, but few of us get to capitalize on them. @viallnicholas28's successful DM slide to January Jones in 2018 will forever be a beacon of hope for the rest of us. No swings, no hits folks.

“I was legit dating my celebrity crush. I was a guy living in Milwaukee being like, ‘This chick is so hot, watching Mad Men.’ Fast forward 10 years later, she turned out to be a really cool woman from South Dakota. Our upbringings were very similar. Her dad reminded me of my dad. So yeah, if you’re asking me what my coolest moment was, that would have to be it.”

“She had talked about me on James Corden’s show. And it was kind of anecdotal and playful. And then my friends are sending it to me like ‘January Jones is talking about you!’ And I’m like, ‘Cool, she knows I exist!’

And I just said fuck it. I’ll shoot my shot.

And was not expecting her to reply. But she was very friendly and very nice. I didn’t really know what to do. How do I respond? I definitely had a panel of friends in between responding. I’d be like, ‘So does this sound normal?'”

The pair have moved on from each other, but the lesson remains: No swings, no hits.

.@viallnicholas28 on the instant evaporation of fame after #TheBachelor ends and how he was able to transition into hosting the popular #ViallFiles pod.

Check out our entire Endless Hustle interview with Viall (and listen to his Viall Files pod) below: