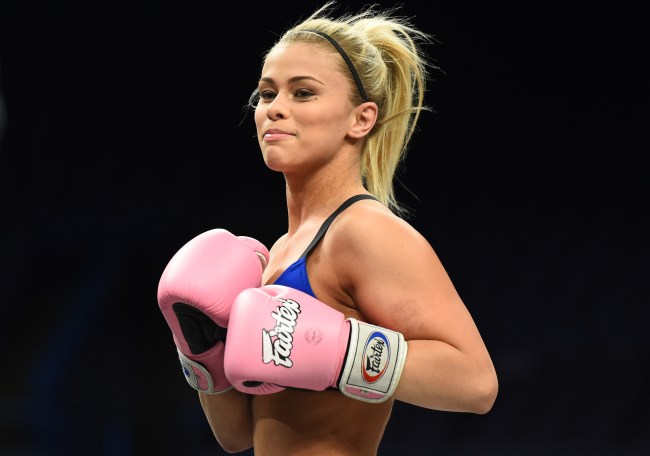 I was raised to never judge a book by its cover, but where I’m from, women who look like Paige VanZant aren’t lining up outside the local gyms vying for their opportunity to take a spinning head kick to the melon.

Maybe I grew up in a bubble, but the Paige VanZant’s from my Boston suburb are now selling bubble tea on IG.

The 26-year-old former competitive dancer enjoyed a seven year stint in the UFC before recently trusting her ‘pretty face‘ in the heavy fists of Bare Knuckle boxing, making her Bare Knuckle FC debut on February 5 against Britain Hart.

We recently sat down with VanZant on our Endless Hustle Podcast presented by Boston Market to her ascension to fame, her time with the UFC and the unceremonious end, and most importantly, nude photo shoots and creepy fan DMs.

Little context: VanZant and her husband Austin Vanderford—a wrestling national champion turned undefeated MMA fighter—went viral at the beginning of quarantine (April 2020, omg) for their tasteful nude photoshoots that were posted to Instagram.

Naked photoshoots, foot fetish DMs – we went there with @PaigeVanZant on Episode 26 of #EndlessHustle: https://t.co/Zm4LjxTiDu

“We’re married. He and I just kind of walk around the house naked constantly. He was like, ‘I’m going to go do pull-ups.’ Starts doing pull-ups in the garage, and I’m like, ‘Oh my gosh, I have a great idea.’

I set up our little tripod, which everyone’s so curious who takes the pictures. Like no one’s ever heard of a tripod before. We did the first one and I’m like, this is awesome, let’s make this a thing.

Truly we were just trying to spread a little bit of happiness during the first two weeks of quarantine when everyone was stuck at home. We didn’t realize it would make that big of an impact.”

VanZant, who in 2019 backed out of a fight with flyweight fighter Maycee Barber after she slid into her husband’s DMs trying to agitate her, spoke about the countless creepy DMs she gets daily from her 2.7 million followers.

“The creepy DMs have definitely not gone down since I’ve gotten married, which I thought they would. There’s too many to even think about. I don’t know what the deal is with people that are obsessed with my feet, but I get the craziest feet fetish fans who send messages to my husband like, ‘Please show Paige’s feet.’ It’s crazy.”

Can you imagine how delusional you need to be to message someone’s spouse asking them to be your fetish middle man? That would be a dangerous move if the husband was an accountant, never mind someone who could submit an average guy with a flick of the wrist.

If you think Paige is exaggerating, explain how this photo has 34,000 likes and feet comments for days.

Ok, I think I need a shower.

Listen to our entire interview with Paige below. Aside from feet, we talk about her upcoming Bare Knuckle FC debut, UFC257, dancing for the Portland Trail Blazers, and more!