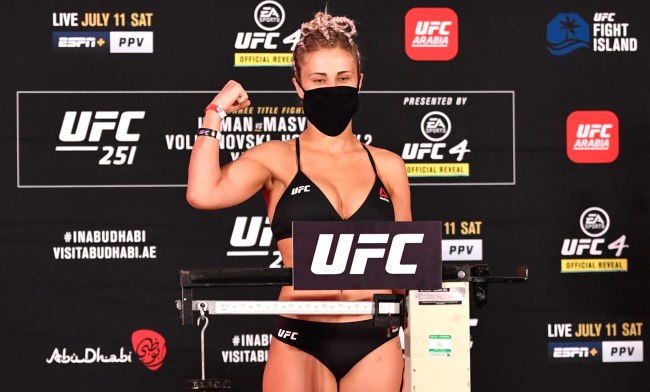 After a first-round submission loss to Amanda Ribas at UFC 251, her fourth loss in her last six fights in the UFC, Paige VanZant’s contract with the company officially came to an end.

After starting out her MMA career 6-1, the 26-year-old VanZant has appeared on Dancing with the Stars, released a biography, and gone 2-4 inside the octagon.

She has also been one of the most vocal mixed martial artists when it comes to how little most UFC fighters get paid.

“I’ve added up all the money I’ve made in the UFC over six years, and I could have just had a regular job with the same pay,” VanZant said in an interview prior to her fight against Ribas.

This week, VanZant, now a free agent, signed a new contract and it wasn’t with Bellator – though they did make her an offer – it was with the fledgling Bare Knuckle Fighting Championship.

It’s a four-fight, exclusive contract that is expected to see her begin fighting in November. Bec Rawlings, who holds a 8-9 record in mixed martial arts, is the current BKFC Women’s Featherweight World Champion after winning all three of her fights.

“It was an amazing contract, an amazing opportunity,” VanZant told ESPN. “I also feel like it’s not a move backwards for me. It’s a lateral move to a new opportunity, a new challenge, a brand new sport. I really have sparked a brand new passion for it and especially for striking in general.

“And, on top of that, I feel like I still have this stigma in MMA that I’m just a pretty face, and what a way to prove to people that’s not the way I see myself at all. This is a sport where people probably have the highest rate of getting cut open and having long-term scars is definitely something that I’m not even worried about for me. It’s just the love of competition and I’m really excited to go out there and show off in such an amazing sport.”

With incentives, VanZant could take home more than $1 million by the time the contract is completed.

VanZant, who says she had offers from “five or six huge, solid promotions” including ONE Championship, says the despite leaving the UFC for the BKFC she isn’t ruling out a return to MMA.

“I still have a huge passion for MMA, and I just recently relocated to Florida to train with American Top Team,” she told ESPN. “Obviously they are one of the best MMA gyms in the world. Right now, my sole focus is boxing, but in a few years I could go back to MMA or I could just be making so much doing this bare knuckle boxing that I don’t do anything else.”