Judging UFC 251: Usman vs. Masvidal By Its Cover, Fight Island Is About to Be Lit 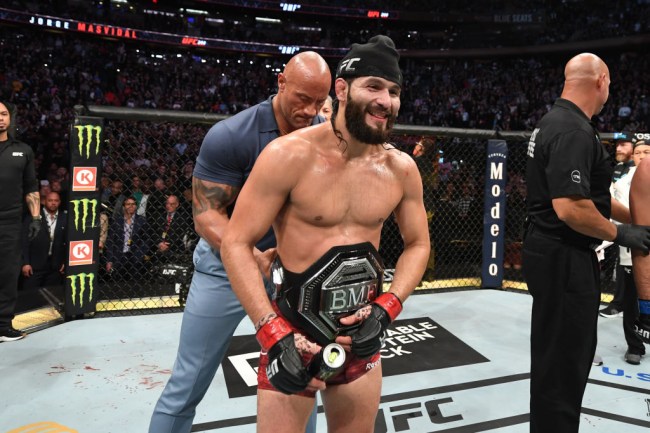 It only took a global pandemic and the most unlikely of circumstances to solidify and finalize the UFC 251 fight card. And now, less than 24 hours from fight night, the combat sports world has shifted its full attention to Abu Dhabi, “Fight Island,” and a welterweight title fight between divisional champion Kamaru Usman and UFC BMF king Jorge “Gamebred” Masvidal.

Some might even call this the biggest project the UFC has ever embarked upon. Fortunately, Masvidal was available to help them pull it off.

By now, most people know the back story. Original UFC 251 (Saturday, July 11, 7 pm PST / 10 p.m. EST) main event challenger Gilbert Burns never made it to Abu Dhabi. He was pulled from the fight card after testing positive for COVID-19, leaving the Pay Per View without a main event, albeit with two other great title fights on the card: a rematch between featherweight champion Alexander Volkanovski and Max Holloway, and a clash between legend Jose Aldo and rising challenger Petr Yan, who will square off for the vacant bantamweight belt.

Still, “Fight Island” was designed to be the biggest fight of the year, a private tropical combat retreat in place of the annual International Fight Week. The UFC knew that, and called up Masvidal, who initially passed on the fight after contract negotiations stalled, and then turned bitter.

Six days out from fight night, the UFC and Masvidal reached a deal, giving “Gamebred” the opportunity to live up to the moniker he earned in the backyards of Miami, fighting bare knuckle in a crew that included Kimbo Slice. Almost immediately, while still in his bathrobe, Masvidal was whisked away to the Middle East for his first UFC title shot.

The inclusion of Masvidal atop the UFC 251 marquee is no small detail. Neither is his heated rivalry with Usman, the champion. The two have been talking trash since January, when they had a very public argument in the Super Bowl media tent. A name like Masvidal’s, along with legitimate bad blood, is great for business, and suddenly, with less than a week until fight night, the UFC 251 sales trends shifted from modest to major.

In other words, we have a big-time fight card on our hands. A blockbuster, even …

Stylistically, most analysts are looking at Usman’s wrestling as the most dominant weapon of them all.

I can’t say I disagree. Usman has been untouchable since joining the UFC, going 11-0 inside the Octagon. In his last two fights in particular, Usman has shown sharp striking and an otherworldly gas tank. However, when it comes to weapons, Masvidal has at least eight, maybe more.

The owner of the fastest knockout in UFC history, Masvidal can end the show at any moment. Sure, he’s not a dominant offensive wrestler like Usman, but “Gamebred” has excellent takedown defense. And while the threat of Usman’s wrestling may limit Masvidal’s kicking output, there really is the chance for anything to happen in this fight.

Experts are pointing to Volkanovski’s style and build, which not only includes the massive threat of power in his hands, but also a high level fight I.Q., along with a reach advantage, despite a height deficit. It’s as if Volkanovski was almost built to beat Holloway, almost in the same way Holloway was built to beat his predecessor, Jose Aldo.

Then again, Max Holloway is a decorated former champion, the greatest featherweight of all time some even say, so to count him out in this fight would be foolish. The real question is, can Holloway make the round-by-round adjustments? It’s likely that whoever wins the early rounds will take this fight by decision.

I can’t disagree with that analysis, and can’t wait to watch how it plays out.

But before that, there’s an obscure title fight between Aldo and Yan. Well, it’s obscure in name and concept only. In actual technical schematics, Aldo vs. Yan has the potential to be an absolute cracker to determine the UFC’s next bantamweight champion.

When this title fight between Aldo and Yan was booked, most people, myself included, didn’t necessarily understand how Aldo, a fighter on the heels of a pair of losses, who has never won a bout at bantamweight and never even made the 135-pound limit, would be propelled into a title fight.

However, given that we’re in a pandemic and that Jose Aldo is an absolute MMA legend, I gave up caring about how he earned this title shot and focused on the fight itself, which will likely be a brutal standup war between two guys who like to throw hands and trade leather.

For his part, Yan has looked like an indestructible force inside the Octagon. A perfect 6-0 in the UFC, Yan is a bully, a bruiser, a technical boxer and striker who can keep the fight standing. He can take the punishment, but does a much better job of dishing it out.

In his years as the UFC featherweight champion, Aldo was much the same.

On paper, it’s a bitchin’, bitchin’ brawl. And, given that it’s one of three title fights on a five-fight Pay Per View card that also includes a rematch between former strawweight champions Rose Namajunas and Jessica Andrade, along with a bout between flyweights Paige VanZant and Amanda Ribas, Aldo vs. Yan is still a mere appetizer before the main course that is Usman vs. Masvidal.

Months ago, when Dana White first made mention of “Fight Island,” the general public scoffed at the notion of fights in the sand. The tropical accoutrement was merely an illusion of the collective consciousness, though. And while we might not be watching UFC 251 live in the jungle on July 11, the reality is something rather exceptional and amazing.

The UFC is literally promoting its biggest fight of the year, during a pandemic, under the most ridiculous and innovative conditions, complete with rampant COVID testing. In some ways, it’s the biggest thing to happen to mixed martial arts, and there’s very little chance that UFC 251 will be anything less than an incredible night of fights.