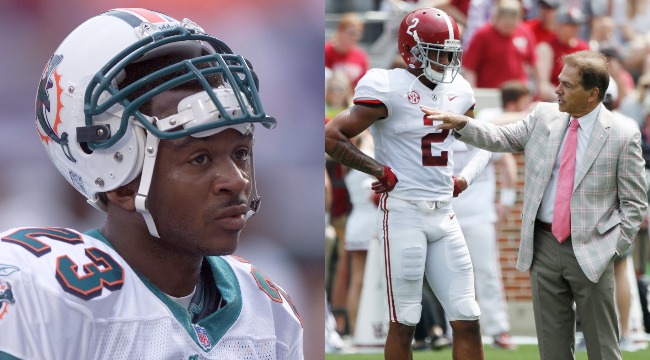 Patrick Surtain II is the betting favorite to be the first defensive player drafted in tonight’s NFL Draft after a cartoonish junior season at Alabama in which he was voted Unanimous All-American, SEC Defensive Player of the Year, and a finalist for the Nagurski, Lott, Thorpe, and Bednarik Awards.

While there’s heavy speculation that the 6’2”, 200-pound cornerback will go to the Dallas Cowboys with the #10 pick, we sat down with his father—former three-time Pro Bowl cornerback for the Miami Dolphins Patrick Surtain—about where he’d like to see his son land.

Via our Endless Hustle:

Alabama's @PatSurtainll is the betting favorite to be the 1st defensive player selected in tonight's #NFLDraft.

His dad & former 11-year NFL CB Patrick Surtain on where he'd like to see his son land & the advice he's giving him along the way.

“I would say the Dolphins, man. This is where I played. I could drive 15 minutes and go see him. That would be the ideal situation. And I love what Coach Flores is doing with that team. That defense, man, is humming. Obviously they need some more pieces on the offensive end.

And just to carry on the family legacy, the last name. How cool would it be to be playing in the same stadium your father played in. Even though I want him to blaze his own path, that would be a cool story.”

Surtain would go on to say his ultimate goal is simply for his son to do better than he did—“a longer career, make more money than me, have all the accolades, and hopefully go to the Hall of Fame.”

We also spoke with Surtain about why his son chose to attend college at Alabama when, as a five-star prospect and the #6 overall player in the 2018 recruiting class, he had his pick of anywhere in America.

Surtain II ultimately chose Alabama because “how can you turn down Nick Saban.” His dad also gave us a glimpse into what Saban’s pitch was like.

“He tells them straight up. He goes: ‘Alabama is not for everybody. If you don’t want to compete, go somewhere else. But if you want to come in day in and day out and compete against the best of the best, come to Bama.'”

Check out our full interview with Surtain Sr. (and Howie Mandel) below: