Pro Tip: All You Need To Do To Convince Rob McElhenney To Create A TV Show With You Is To Offer Him A Free Trip To Montreal 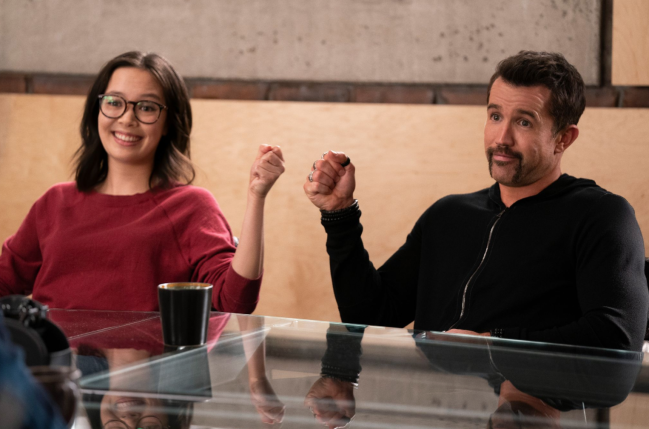 I can’t imagine how many emails Rob McElhenney receives daily with the subject line: Show Idea! or Read My Script Please! or Bite My Bird.

It’s baffling that Rob pays mind to any of these pitches, even if it comes from one of the biggest gaming development companies on the planet.

Ubisoft—the gaming company behind Assassin’s Creed, Rayman, and the Tom Clancy series—managed to position itself on McElhenney’s radar in 2018 when company heads (& Always Sunny fans) tried to convince the comedy juggernaut that the gaming industry was fertile ground for a successful series.

Rob initially declined, wholeheartedly, before accepting a “free trip” to Canada to tour the studio. Within 10 minutes of the tour, the seeds of the highly-reviewed Mythic Quest were planted in McElhenney’s head.

We sat down with McElhenney and fellow co-star Charlotte Nicdao (who plays lead engineer Poppy Li) to discuss the impetus for the series, and what to expect from Season 2 (premiering on AppleTV+ on May 7).

Catch Season 2 of Mythic Quest premiering May 7 on @AppleTV+. pic.twitter.com/rDyhhzS1ug

“It started when I got approached by Ubisoft, which is a game development studio,” Rob said. “They came to me and said, ‘Hey, we’re really big fans of It’s Always Sunny In Philadelphia, would you be interested in making a show about the video game industry?

And I said ‘No,’ because I had no interest.

And they said, ‘Well, would you just come take a trip with us to Montreal to tour the studio?’

And I’d never been to Montreal before, so I thought, it’s a free trip to Canada. That might be fun, but I really didn’t see a path forward.

Until I spent time in the gaming studio. Within 10 minutes, I knew we had an interesting television series because you just realize very quickly that you’re meeting people from all over the world who’ve come together for the love of this very specific thing, which is to make video games.

Fast forward months and guest contributions from Anthony Hopkins and Snoop Dogg, AppleTV had itself a hit.

And all it took was for someone to reach out to Rob and be like, ‘Hey man, huge fans. You wanna make a show?’

Hollywood ain’t as formal as we perceive it to be.