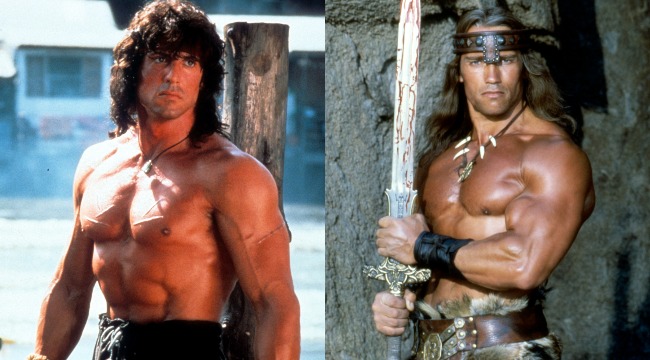 But in the late 70s, when they were both 20-somethings with more testosterone than a Planet Fitness on New Year’s Day, they could not stomach each other, or as Sly put it years later, the two shared a “violent hatred.”

As legend has it, Arnold and Sly met face-to-face for the first time at the 1977 Golden Globes, where Rocky was nominated for several awards. Arnold, who wasn’t yet a household name, rubbed Sly the wrong way when he began bragging about his future success. After Rocky lost at the Golden Globes (he’d then go on a 40-year nomination drought), Arnold mocked Sly’s failure, so Sly picked up a vase full of flowers and launched it across the room at Schwarzenegger.

We spoke with Frank Stallone on our Endless Hustle podcast about how real and deef that beef actually was.

Frank @Stallone details why the young, testosterone-filled alphas couldn't stand each other as their careers were just taking off.

“They did not like each other at one point. If you look back at 1977 when Sly won the Golden Globe, Arnold was sitting next to him at the table. Arnold wasn’t really that well-known at all in ’77. He didn’t become a star until way later in the ’80s. They were good friends and I think Sly was the first guy with the headband, the cut off, the bandoliers, and the action stuff. And Arnold kind of took that when he did his movies.

They did go through a point when they didn’t like each other at all. Now they are very good friends, but there was a period. But that’s what happens when you’re young and you’re filled with testosterone and you have no sense of morality. You just break each other’s balls.”

Frank—whose documentary Stallone: Frank, That Is is out now—avoided getting involved in the drama because he found it petty and pretentious.

“I stayed way far away from that—‘Hey, Arnold. You have a movie. Look I’m the guy with the headband.’ It’s like, ‘Who cares?’ Like, I’m starving. You guys live in like $12 million homes. Like, I’m sympathetic? Not really. I’m never sympathetic to rich people that much for some reason. It’s like Mickey said in Barfly. She goes, ‘Well, rich people feel pain.’ He goes, ‘No one suffers like the poor baby.'”

The pair have since arm wrestled and made up. The fame, money, and women likely helped that along.

Check out the entire Stallone interview below: