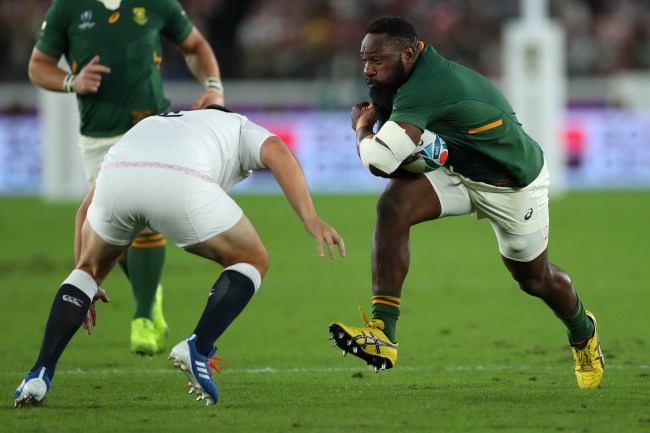 On its surface, rugby and football appear to be first cousins, both requiring intense physicality, toughness, endurance, the ability to play within a structure, and a sizable set of cajones.

But, there have been just a dozen former rugby players who’ve made up the now tens of thousands of men who’ve donned an NFL helmet—namely Gary Anderson and rugby Olympian turned 3-time Super Bowl champion Nate Ebner.

South African rugby legend Tendai Mtawarira joined our Endless Hustle podcast to discuss why the skillset between rugby and football isn’t as transferrable as one would think.

Rugby legend @Beast_TM explains the difference between the two most physical team sports in existence.

"I wouldn't advise rugby players to transition to the NFL. It's that much tougher. Unless you're a kicker."

“Watching a few rugby players try to dabble in the NFL and try to make it, it wasn’t a success story. We play two different sports. The NFL is very technical. A lot of plays you have to learn the playbook before you get on the field. Whereas in rugby you can literally get to a franchise and then grasp what we’re doing in one week.

In the NFL you need maybe two years to actually grasp everything. There was a guy called Dan Adongo. He played for the Colts for a season. He got activated for a few games, but he was a proper example for other rugby players pursuing the NFL.”

“It’s something that is not really attractive because of that fact. We’re used to something very simple. You play rugby and you learn a few plays that are not complicated. In the NFL you have to make sure that you master this thing and grasp all the different calls, which is pretty difficult.

So I wouldn’t advise rugby players to transition to the NFL, unless you’re a kicker. Do field goals and it’s much easier. If you had to ask me a guy who could [transition], I’d say Francois Steyn. He’s one of the best kickers South Africa has ever had in history. He’s unbelievable.”

Can’t help but think Tendai is being humble here. From the below clip alone, I think I’d take him over 65% of the New York Jets roster.

All because of this man Tendai Mtawarira 💪💪💪pic.twitter.com/KIaBFJpvjT

Listen to our entire Endless Hustle interview with The Beast (and Atlanta Hawks’ Kevin Huerter) below!