Timothy Olyphant Once Put Josh Duhamel In His Own Christmas Card, Because Even They Can’t Tell Each Other Apart 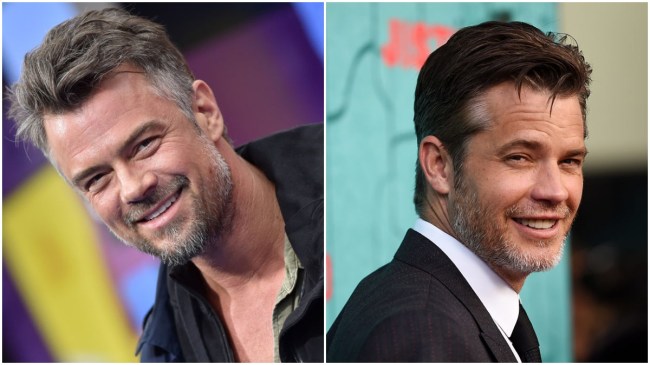 Not to blow smoke up my own behind, but I like to believe I’m more open about the interviewing process than most entertainment writers out there. I’ll field questions from readers/listeners, I’ll explain what questions I chose to ask and why I chose them, I’ll even share questions that wind up on the cutting room floor. There’s a part of me that genuinely believes I’m a fan just like everyone else who just so happened to luck my way into an awesome writing career, so I try to share my experience with as many people as I can, as often as I can.

So,last week, ahead of my interview with Josh Duhamel about his new Netflix series Jupiter’s Legacy, I jokingly tweeted out that I was considering opening with some hard-hitting journalism by asking if he and Timothy Olyphant have ever been seen in the same room together (because, in case you haven’t noticed, these two are arguably Hollywood’s preeminent doppelgangers — it’s absolutely wild):

Legitimately considering opening with: “Has anyone ever seen you and Timothy Olyphant in the same room?”

While I was only half-kidding at the time I hit send, the response to the tweet was far more positive than my usual dumb Twitter jokes, so I figured that the best course of action was to stick to my guns, be a man of my word, and go for it. I only had 10-minutes with Mr. Duhamel, which actually gave me the perfect set-up for the punchline, as I opened the conversation with:

“I don’t have much time with you today, unfortunately, so I want to get right into the important stuff — has anyone ever seen you and Timothy Olyphant in the same room?”

This, as the kids call it, is a “Vibe Check”: I’m gonna learning everything I need to know about Josh Duhamel in the next 10 seconds. Either he rolls with it, or is — perhaps justifiably — none too thrilled with my glib opener. Luckily for you and I, though, Josh was an awesome sport about it, opening with a hearty chuckle and a story about the first time he and Olyphant met:

“You want to hear a great story? A couple years ago I was at a fundraiser for [Los Angeles Dodgers pitcher] Clayton Kershaw — he does this ping-pong tournament at Dodgers Stadium on the field,” Duhamel tells me.

“And they had some media there, and I talked to a guy from the LA Times — for about 10 minutes, I sat and talked to him. And at the end he said, ‘So, did you have fun playing so-and-so on Justified?’ And I was like, ‘Wait… you think I’m Timothy Olyphant?! I’m not. My name is Josh Duhamel.’

So I go inside to this event, and who shows up? It’s Timothy Olyphant. And we hadn’t met but we’d been hearing for years that we looked alike — and I agree — and so it was fun for both of us to hang out and laugh about it. And then towards the end of it, he [Olyphant] was like “Hey, come take a picture with my family.” So he takes the camera, and I’m sitting there with his family — you know, he’s got like four kids. So we take this photo, and come Christmas time six months later, I get a Christmas card from the Olyphants with *me* on the card saying… “Merry Christmas, Happy Holidays, from the Olyphants.”

Make sure to check out Josh Duhamel in the first season of Jupiter’s Legacy, which is now streaming on Netflix. You can also listen to the audio of my interview with Josh below.