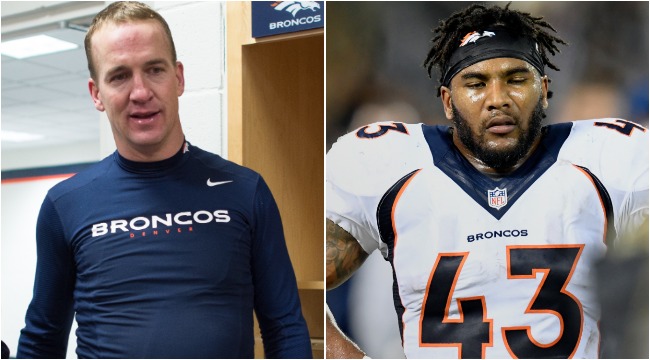 It takes an obscene amount of cocksuredness to walk around in the buff in a locker room filled with alphas, especially when you’re pastier than Charlie Brown and your body is shaped like a TI-83 calculator.

But when you’re an MVP, player-coach, and own 22 flourishing Papa John’s franchises, it adds a little girth to your pecker.

Super Bowl Champ @BossWard43 joined our @Endless__Hustle podcast to talk about the respect Peyton Manning had in the locker room, even when he was walking around in just a jock strap.

“My first day on the team. My first team meeting. Each coach, coordinator talks. Head coach talks. Meeting over. See you tomorrow, get ready for practice. No.

Jack Del Rio talks. John Fox talks. And before you guys go…Peyton Manning. It wasn’t even like, ‘On your way out Peyton has something to say. It was like, ‘Ok, John Fox is done talking. Alright, now Peyton Manning.

[He gives] a whole spiel, a head coach spiel, and then he dismisses the team. And I was like, ‘Ok, this is different.’ I’m on a team with a whole different caliber of player. His whole status is above and beyond anyone I’ve ever played with. That was cool to see, I’ve never seen that in all my years playing football.”

I’m coming in like, it’s Peyton Manning, obviously he’s a Hall of Fame player and he’s about business. He’s going to be straight as an arrow, he’s going to get in practice and work, do the things that are supposed to be done and get up out of there. Little did I know, he’s a complete jokester and it was fun.”

Check out our entire conversation with Ward where we talk about his Welcome to the NFL moment, sneaky women in professional sports, not being allowed in his own Super Bowl party, and more. Oh, and we also talk with three-time world heavyweight champ Lennox Lewis as a Christmas bonus.