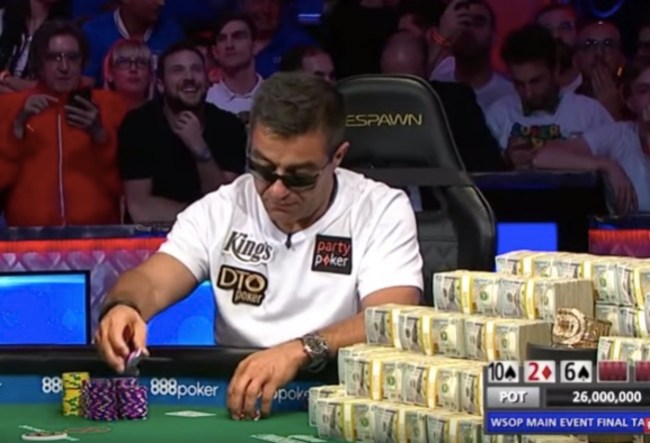 The 2019 World Series of Poker Main Event came to a close late last night. The final table was broadcast live on ESPN so there aren’t any spoilers here.

Gone are the days when ESPN used to record everything ahead of time and make us wait months to see it on TV, now they broadcast the slow play and final table live which is a much cooler experience in my opinion.

55-year-old Hossein Ensan of Germany was crowned the 2019 World Series of Poker Main Event champion and for that win, he received a paycheck of $10 MILLION as well as a gold WSOP winner’s bracelet covered in diamonds. Hossein is already an accomplished professional poker player, going into the 2019 WSOP Main Event he had already won $2,673,206 in career poker earnings.

He now ranks 50th on the all-time money list with this $10 million Main Event win over Dario Sammartino who got all of his chips in the pot heads-up with plenty of chances to win the hand. Poker Central has footage of the final hand from last night and it’s 100% worth watching.

The final 2019 WSOP event kicked off on Monday and ended yesterday, the $5,000 No-Limit Hold’em (Event #89), and with last night’s Main Event final table coming to close that wraps up another successful WSOP year. Robert Campbell won the 2019 ‘Player of the Year’ with 3,418.78 points, edging out Shaun Deeb and Daniel Negreanu (2nd and 3rd, respectively).

READ NEXT: This Might Truly Be The Worst Bad Beat In WSOP History When A 99% Winning Hand Loses In Brutal Fashion