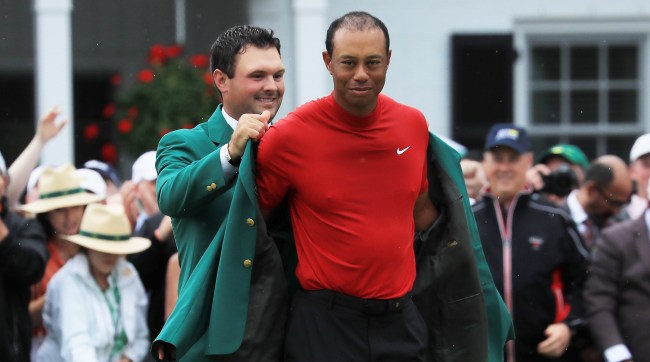 The 2020 Masters is already going to be unlike anything we’ve ever seen. For starters, the tournament was moved from April to November of this year and will be played without any spectators, plus, the drive-chip-and putt finals and Augusta National Women’s Amateur have both already been canceled as well.

While Augusta National hasn’t announced whether or not the annual Par 3 contest held on Wednesday will be played or not, we do know that one traditional event will be taking place, the Champions Dinner.

Tiger Woods, last year’s Masters champion and the man responsible for coming up with the menu for the night, told reporters at the ZOZO Championship that the dinner is still on for this year. Back in September, it was reported that past champions had been notified that the dinner was still on the schedule as well.

Given the fact that we’re still amid a pandemic, however, the dinner will look different than in year’s past. Woods explained that it won’t be held upstairs in the clubhouse as it usually is, but instead be held downstairs where those that attend can all socially distance themselves. He also explained that some of the past champions, specifically those that are older and more at-risk, likely won’t attend the dinner.

“I think we’re not going to get a lot of the past champions coming because obviously they’re at the at-risk age,” said Woods. “This is unlike any times we’ve ever had in the past, so we’ve got to do what we can do to obviously have the traditions that we’d like to have but also maintain safety guidelines.”

When it comes to the menu for the night, Woods will be going with the same setup he had planned for the tournament in April: chicken and steak fajitas, sushi and sashimi, and milkshakes for dessert.