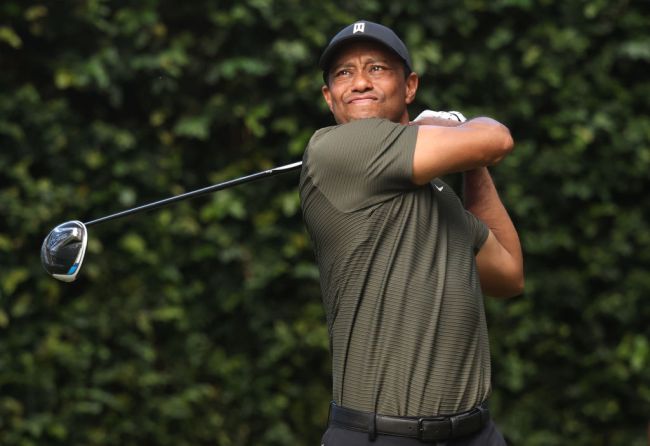 Heading into Thursday’s opening round of the 2020 Masters we didn’t really know what to expect. From how the golf course would play, the atmosphere without patrons on the ground, or how defending champion Tiger Woods would come out of the gates. Add a near three-hour weather delay about a half hour into tee times and the questions involving The Big Cat grew and grew.

Given the fact that he needs a significant amount of time to get his body right before teeing it up, his original 7:55 AM tee time already had plenty of fans worried. Woods then had to deal with his tee time being pushed back three hours to 10:55 AM. But right away on the 10th hole, his first of the day, it was clear we were going to get the Woods we’re so accustomed to seeing put on a clinic at Augusta National, not the Woods who has struggled to just one Top 10 finish in all of 2020.

After missing the green well left from just 178 yards on No. 10, Woods managed to get up and down from a tricky spot and that really seemed to get the wheels moving on what would be his first bogey-free round at a major after 105 rounds of never doing so.

Woods would go on to birdie the 13th, 15th, and 16th. He nearly made an ace at the short Par 3. When Woods is 3-under through six holes, at a course he’s won at five times before, it’s safe to say he was extremely comfortable.

Don’t look now, but Tiger Woods is -3 through six holes at #TheMasters pic.twitter.com/xeFZiKKQDr

It was even noticeable through the TV coverage about just how calm Woods was during his round on Thursday. Nothing seemed to be getting to him, which why would it, he hit 15 of 18 greens to go along with 10 of 14 fairways. There’s likely no other course on the planet that Woods feels more comfortable at, especially when conditions are soft, and the confidence was oozing from him all afternoon

During his post-round interview on ESPN, he was asked what he was most encourage about from his 68. Usually, Woods mentions a wayward drive, maybe a poor wedge shot, but on Thursday his answer to that question was ‘everything.’

Tiger’s post-round interview should have everyone within 100 miles of Augusta trembling.

Was asked what he’s most encouraged about, he said ‘everything.’ He usually nitpicks, but not after today’s round.

There is a lot of golf yet to be played. Things can and will happen. Heading into his Masters’ defense there wasn’t much optimism surrounding Woods’ chances to repeat, let alone be in contention heading into the weekend, but if Thursday was just a preview of what is to come for Woods, watch out.