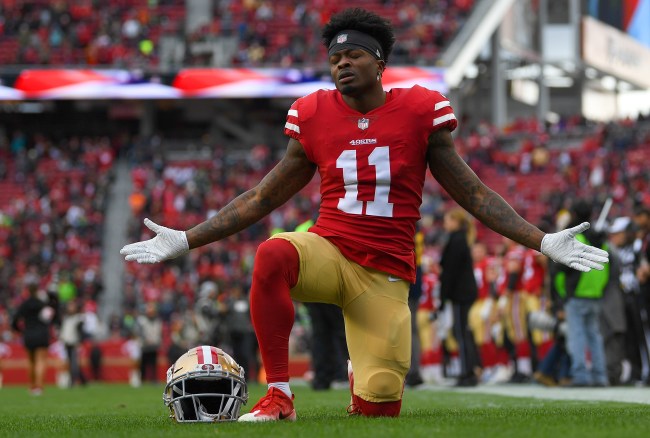 Who is the fastest man in the NFL? That’s a pretty hard question to answer but on Saturday some of the fastest NFL players raced each other side-by-side in a bracket-format speed competition, trying to run the fastest 40-yard dash. The event was broadcast on PPV and the winner was awarded $1 million.

The event got off to a quick start when Jets wide receiver Robby Anderson squared off against Saints running back Alvin Kamara. Unfortunately for Kamara, he didn’t stand a chance against Anderson.

In the same round, Panthers Donte Jackson was pinned against Vikings cornerback Trae Waynes and won after Waynes slipped early in the race.

In the end it was former Olympian track and field athlete and 49ers wide receiver Maqrquise Goodwin went on to win the $1 million prize when he beat Jackson handily in the final race of the night.

Marquise Goodwin with the $1 million check for winning the inaugural 40 Yards of Gold. pic.twitter.com/5R8IGbLHyZ

It is worth noting that Ted Ginn Jr and Dominique Rodgers-Cromartie no-showed at the last minute without explanation.