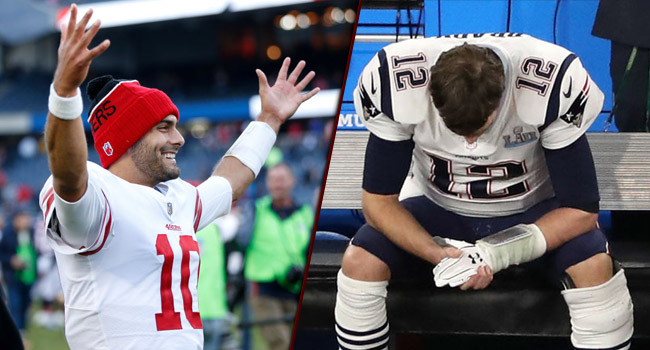 The San Francisco 49ers just signed quarterback Jimmy Garoppolo to the richest average per-year deal in the history of the NFL. Garoppolo has started seven games in his pro football career. Surely there is no way this move could possibly backfire, right?

NFL Network’s Mike Garafolo reports that the 49ers agreed to terms on a five-year contract with Garoppolo worth $137.5 million. That is not a typo.

Garoppolo to average $27.5M in annual salary over the next five years.

That’s right, Jimmy G will make 96.4 percent more than Tom Brady in base salary in 2018. Seems about right, no?

One guy is one of only two players in NFL history to win five Super Bowls while winning four Super Bowl MVP awards, three league MVP awards, and been selected to the Pro Bowl 13 times.

While the other guy has played in 23 games in his career (the other guy has 27 postseason WINS), started seven of them, thrown 272 passes for 2,250 yards, 12 touchdowns and five interceptions.

Which one is going to be paid twice as much the other guy again?

Jimmy Garoppolo has led his team to more points per game in his starts (28.3) than any other quarterback over the last 25 seasons (minimum 7 starts) pic.twitter.com/DwIwqHrywX

Have to love how it says “minimum 7 starts” because if it were any more than that Garoppolo wouldn’t be able to be on the list.

Eh, he’s almost as good as Brady and Montana at this point, right, Jerry Rice?

.@JimmyG_10 has a fan in @JerryRice 👏 pic.twitter.com/RnKVqmMhFP

Looks like he will now be able to pay back his ex-teammate Julian Edelman the 20 bucks he owes him.

Congratulations @JimmyG_10!! Happy for you my friend..#jimmygotpaid

Max this man out!! Happy we got this thing done! Congrats @JimmyG_10 !! Now let’s get to work! https://t.co/WfHaJhgFjn

I see you @JimmyG_10 #BuildingSomethingSpecial

So does every other NFL player who wants to make more money.

Congrats to dah homie @JimmyG_10 on securing the bag 💰💰💰

Congrats @JimmyG_10!!! That just set the tone for the offseason! Got what you deserved! #10s