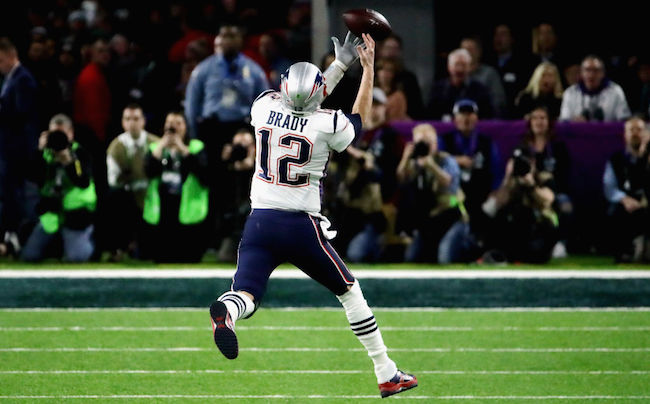 Tom Brady might be one of the best quarterbacks— if not the best quarterback— to ever play the game, but anyone who’s paid at least a little bit of attention to his career knows his magical powers essentially vanish as soon as he leaves the pocket. He has about as good of a running game as a wounded gazelle with arthritis, and as he showed on Sunday night, his abilities as a receiver aren’t much better.

The Patriots attempted to pull off a trick play during the second quarter of Super Bowl LII on Sunday, but Brady was unable to reel in a pretty on-the-mark pass from Danny Amendola. The Eagles added insult to injury when Nick Foles caught a touchdown pass to extend their lead to 10 points before the end of the half in a play he’s been practicing since high school.

On Monday, Pittsburgh Steelers wideout Antonio Brown hopped on Instagram to take a shot at Brady’s private trainer Alex Guerrero and ask former teammate James Harrison to let Brady know he’d be more than happy to help the QB work on his receiving game during the offseason.

At least the Steelers defense has plenty of time to prepare for the trick play Bill Belichick will inevitably call out of pure spite when the two teams face off in Pittsburgh next year.