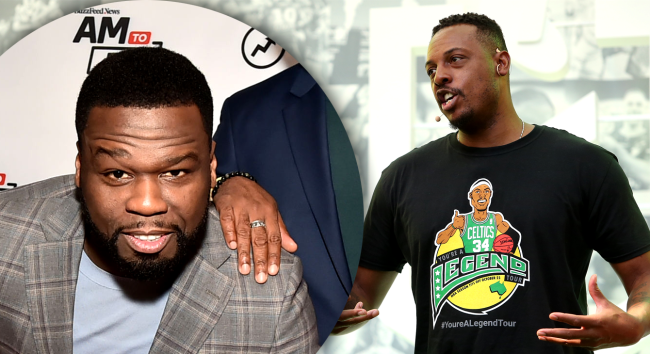 By now, pretty much everyone has seen the video that got Paul Pierce fired from ESPN. The video, a twerk-filled IG Live stream with the 10-time All-Star and his friends throwing money at the strippers, playing poker, and getting a haircut was just too much for the Disney folks to handle.

Reactions to the video by current NBA stars ranged from Kyle Kuzma calling Pierce a “sicko” to Jordan McRae saying Pierce was just looking for a “paid vacation.”

Then, to top things off, Pierce’s reaction to getting fired by ESPN was almost as unbelievable as the video that got him canned. The 43-year-old appeared to not care whatsoever about the repercussions of his actions over the weekend, laughing about it on social media and promising “bigger and better things” are coming. What those “things” are, we have no idea.

It was that attitude by Pierce that led Instagram’s favorite troll, 50 Cent, to drop a (heavily edited) version of a portion of Pierce’s IG Live sesh with the caption, “Paul don’t give a f–k, He said they gonna fire me LOL.”

“I’m Paul Pierce, f–k ESPN, n—a, sh-t,” Pierce appears to say (sort of) in the comical clip shared by Fiddy. “They’re gonna try to fire me, baby. I don’t give a f–k. Look at this a–, baby. Looking like two Celtics championship trophies. Shake that sh-t.”

As Pierce so perfectly reminded us all after his ESPN dismissal, “Just always remember to smile, baby.”

Related: Paul Pierce Gets The Meme Treatment After Getting Fired By ESPN For Posting IG Live Stream With Strippers