Did Joel Embiid Rip Ass On The 76ers Bench And Try To Cover It Up? Here’s The Result Of Our Investigation 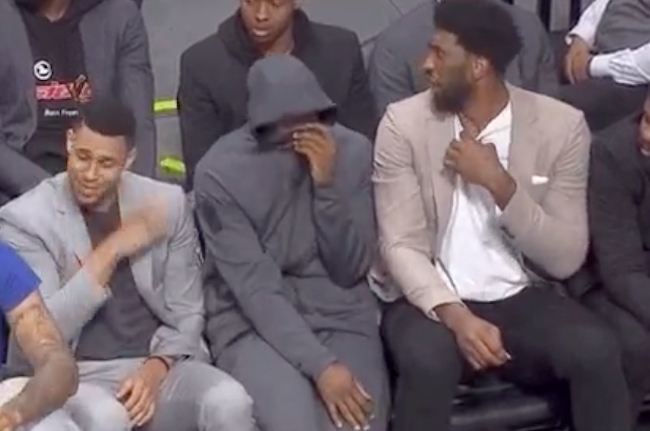 On Thursday night, the 76ers took on the Nets in a first-round playoff matchup in Brooklyn, where Philadelphia walked away with a 131-115 victory to take a 2-1 lead in the series.

Philly managed to get the win without the help of Joel Embiid, who’s been plagued by a knee injury over the past few weeks. He gave things a go during pregame warmups but ultimately decided not to suit up, and while he didn’t play, he may have been responsible for what was easily the highlight of the night.

Around the midway point of the fourth quarter, TNT cut to Embiid and a few of his teammates chilling on the bench at the exact moment they reacted to someone in the vicinity who’d ripped what appeared to be a particularly nasty fart.

Someone farted near the Sixers bench. I'm dying 🤣🤣🤣 pic.twitter.com/5mzDST1lqm

It was evident the fart was a lingerer but there’s one question that remained unanswered: who’s the culprit?

It’s pretty clear from that last cutaway that someone on the Sixers’ bench ripped an atrocious fart and I DEMAND to know who it was.

Smith and his hooded neighbor both seemed to have a pretty natural reaction, and while that doesn’t rule them out entirely, there seems to be a stronger argument for Embiid and Johnson.

At first glance, I was convinced Embiid was the most likely perpetrator. In the video, he appears to be saying, “Who farted? That’s nasty,” and in my experience, people who asked who ripped ass often turn out to be the ones who tooted.

However, after further examination, I’m convinced the stonefaced Johnson is the person responsible for the fart. If it was as rank as it seems, I highly doubt it didn’t waft into his vicinity and I refuse to believe he was telling Ebiid the truth when he said he didn’t smell anything.

I’m not the only person to come to this conclusion.

There is ONE man, not covering his nose. ONE man who’s acting like it ain’t happening. That man is Amir Johnson. Amir Johnson’s lone contribution to the post season will be a rancid fart that might keep Joel Embiid out for game 4. https://t.co/X6A1Ka9Ip7

This man is guilty! 😂😂 pic.twitter.com/aQLJd9bYWq

Amir just can't catch a break with the cameras. 😂

Case closed? I think so but I’ll let you come to your own conclusion.