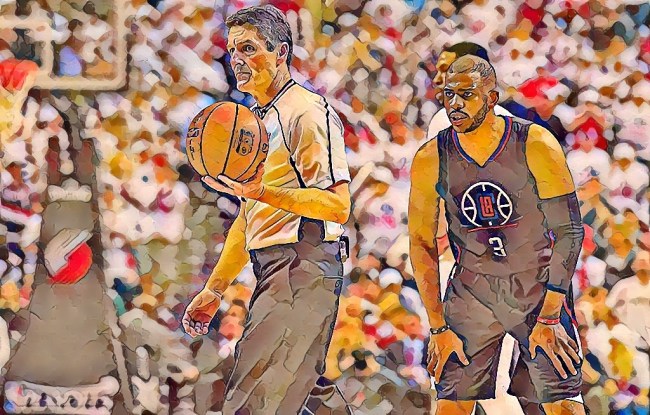 Chris Paul is now 0-13 in games referred by Scott Foster in the playoffs. Zero and thirteen.

Coincidence or conspiracy? A dive into the pair’s checkered history may point to the latter. Please put on your tinfoil cap before continuing.

The genesis of the relationship spans back 14 years when Paul was a third year guard for the Hornets. The Hornets, who had beat the Mavericks in the opening round, fell to the Spurs in Game 7 of the next after going up 2-0. Foster reffed Game 7, and weirdly reminded Paul of this before a Game 7 Bubble loss to Houston.

Things only began to heat up when Paul was traded to the Rockets in 2017. At the time, Paul’s Rockets went 0-6 against in playoff games reffed by Foster.

After receiving a technical foul during a January loss in 2018, Paul said the officiating was “Scott Foster at his finest.”

After a February loss in 2019, James Harden and Paul each called out Foster after the game. Harden said Foster shouldn’t be allowed to officiate Rockets games anymore, and characterized Foster as “rude and arrogant,” saying he couldn’t have a conversation with him during the game.

Paul chimed in to say he met with the league about Foster in the past, and he didn’t know what else he could do.

After the aforementioned Game 7 Bubble loss to Houston, Paul took exception to a delay of game call Foster assessed in the waning moments of the first half, ripping the ref in the post-game presser.

CP3 on the delay-of-game call from Scott Foster.

After a Game 3 loss to the Lakers in the first round of this season’s playoffs, Paul publicly skewered Foster for the free throw disparity.

"If I was a betting man, 11 games in a row."@CP3 has now lost 11 consecutive playoff games straight up officiated by Scott Foster…😬

Before Game 6 of last night’s Finals loss, Paul engaged in a long discussion with Foster, presumably over how much they despise each other.

Scott Foster and Chris Paul spoke to each other before Game 6. pic.twitter.com/Jn6SznkBbw

Following Paul’s 13th straight playoff loss with Foster at the helm, the memes were abundant.

Scott Foster in the Bucks locker room after the game pic.twitter.com/L4hklOiAa5

So now we can see Scott Foster just give every call imaginable to Giannis…who’s already the best player in the series without the sometimes blatant assistance….

How much more can Chris Paul take?