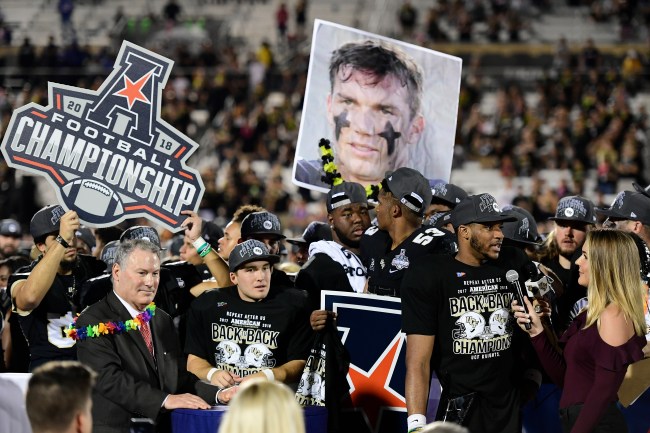 There was a time when I thought UCF was a complete dumpster of a program. I’m a born and raised Floridian, an FSU graduate (we’re trash this season, obviously), and I was raised to believe there are only three college football programs worth a shit in the Sunshine State: FSU (1), UF (2), and Miami (3). Those days are gone.

The UCF Golden Knights are currently riding a 25-game win streak and have established themselves as a force to be reckoned with. Even with their QB going out for the season after twisting his leg in unholy ways the Gold Knights have a potent offense and deserve to be taken seriously.

The College Football Playoffs selection committee notably left UCF out of the 4-team playoff for the second year in a row despite the team having not lost a game in their last 25. UCF will play LSU in a New Year’s Six bowl in the 2019 Fiesta Bowl at State Farm Stadium in Glendale, Arizona and a lot of people will get to see if the Knights are as legit as they appear to be.

The AAC commissioner didn’t mince his words when speaking about the selection committee’s decision to leave UCF out of the playoffs, a decision that was probably made a lot easier by UCF losing their QB. While he respects the committee he still sees a lot of trouble with the decision.

“I’m not here to attack the committee. It’s a great committee. They’re all good people, and they’re good friends. There are a couple of issues. One, of course, is when you do what they’ve done, what UCF’s done, you win 25 straight games. I was talking to one of the student athletes on another team — one of the really good players — yesterday, and he said, you know, being a player, that’s pretty remarkable to do that. And unfortunately, there’s this perception of our conference, which is just flat-out wrong, like somehow we play JV football, which is ridiculous. Temple went down and beat Maryland by three touchdowns. …
“I’m not singling out anyone, but we’ve got seven so-called P5 wins this year, 33 in the last four years, we’ve had big wins against top programs.”

“The point is, what I think is a big concern is they weren’t really seriously considered for this. It doesn’t appear that they were, and that’s the problem. As far as I’m concerned, if you do what they did two years in a row, you beat Pitt decisively this year — I don’t know if you heard what (Pitt coach) Pat Narduzzi said in the press conference. He’d rather play Notre Dame than UCF. …
“You look at the other games that they’ve played and won and the adversity they’ve faced and you say to yourself, ‘Well, what do they have to do?’ And the question then becomes, is half of college football precluded from playing in this playoff? Is it, as Danny White said, an invitational or is it a real playoff?” (via)

Should UCF have made it in over Notre Dame or Oklahoma? Probably, yes. They’ve got a TWENTY-FIVE GAME win streak.

The Golden Knights are currently a +7.5-point underdog and the over/under for that game is set at 51.5….Who ya got?