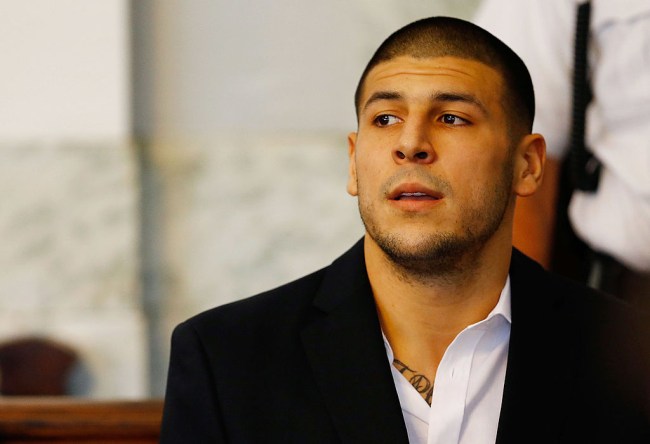 I remember attempting to follow the countless twists and turns of the case of Aaron Hernandez after the tight end was arrested for the murder of Odin Lloyd in 2013, a saga that lasted for four years before it came to an abrupt end when he was found dead in his prison cell days after he was acquitted in the killing of two other men.

Last year, Netflix announced it was setting out to make sense of it all in the form of Killer Inside: The Mind of Aaron Hernandez, a documentary series from the studio behind Making a Murderer that hit the platform earlier this month.

Over the course of three episodes, we got a look into the rise and shocking fall of the former Patriot thanks to previously unseen courtroom footage, recordings of calls he made while incarcerated, and interviews with people familiar with the case—including the absolutely electric Tim SanSoucie, the father of Hernandez’s high school friend Dennis SanSoucie, who sexually experimented with his teammate when they were teenagers.

However, Killer Inside hasn’t been without its critics, including his lawyer Jose Baez and fiancée Shayanna Jenkins, who took issue with how the directors portrayed the facts of the case.

Earlier this week, Jenkins sat down with Good Morning America to give her side of the story and addressed a number of issues. This included shedding some light on Hernandez’s sexuality, and she claimed he never discussed that aspect of his life with her before saying it’s disrespectful to speculate on the matter after someone has passed.

However, it appears we no longer have to do much speculating, as The New York Post reports Hernandez’s brother Jonathan sat down for an interview with Dr. Oz scheduled to air on Thursday in which he revealed his sibling told their mom he was gay during a prison visit shortly before his death:

Then all of a sudden they have this conversation and they’re both flooded with tears across from each other. [It showed] the weight of what’s on my brother being expressed and for a mother to be looking at it across from the scratched glass.”

There were several calls in the documentary that made it very clear Hernandez and his mother weren’t on the best of terms, but based on this story, it would seem they did manage to reconcile a bit before he took his life. However, you can’t help but wonder if things would have played out any differently if he hadn’t been forced to hide his secret for as long as he did.