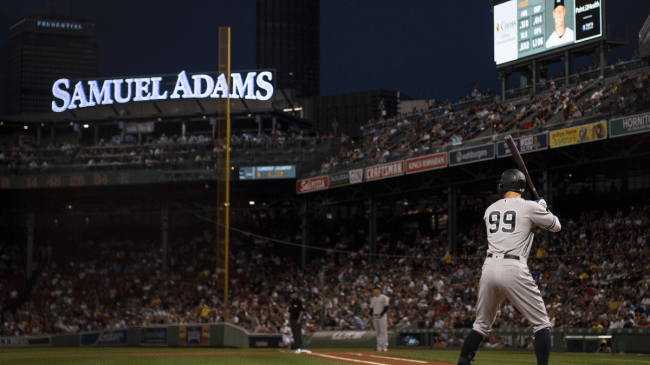 Aaron Judge has still not received an extension in New York. This comes despite the slugger currently leading Major League Baseball in home runs… by 20 dingers.

Judge has smashed 57 homers this year, most recently hitting two in a 7-6 win in Fenway Park. During the series, even rival fans in Boston were chanting MVP with Judge at the dish.

Before the season began, many wondered whether or not the outfielder would receive a new deal in New York. After seeing his performance over the 2022 campaign, Yankees fans are begging the organization to pay up.

On the year, the slugger is hitting .310 with 57 homers and 123 RBIs, which rank 7th, 1st, and 1st in the majors. With uncertainty surrounding his future in the Bronx, one reporter asked Judge if he would consider playing in Boston.

Maybe the Red Sox can reverse the “Curse of the Bambino”

As many baseball fans know, Babe Ruth played for the Boston Red Sox prior to his time in New York. From 1901 to 1919, Boston was one of baseball’s best teams, winning five World Series. Ruth began his playing career in 1914, helping the club win three of those titles.

But ahead of the 1920 season, the Red Sox did the unthinkable. They traded “The Great Bambino” to the hated Yankees.

From 1920 through 2004, the franchise would fail to win another championship, often finding embarrassing ways to lose (see 1986 vs. Mets).

This period was dubbed, “The Curse of the Bambino.”

Now, Boston finally found a way to overcome the curse, winning a World Series in 2004 which included an improbable three-game comeback over the Yankees. They’ve since won three more titles, getting back to being one of baseball’s best clubs.

But what if the Red Sox get a chance to be on the other side of a Bambino-like deal? They just might have their chance based on some of Aaron Judge’s recent comments.

With the uncertainty surrounding his time in the Bronx, Judge was asked about the possibility of playing for the rival Red Sox. Here’s what he had to say.

“[The fans] are some of the best in baseball… A lot of great history, here, and this is one of the best places to play.”

When asked about the possibility of playing for Boston, he didn’t rule it out.

“We’ll talk about that at the end of the year.”

Could you imagine the meltdown in New York if the team trades their best player to the rival Red Sox? It might not lead to nine decades of championship-less seasons, but it would certainly be a shot to the hearts of Yankees fans.

Luckily, there’s one simple way for New York to deny that from happening. Pay. The. Man.