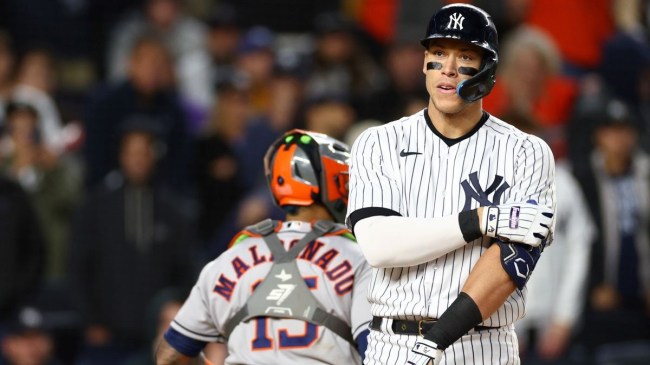 Anyway you slice it, Aaron Judge has an absolutely historic season for the New York Yankees in 2022. Sure, the prohibitive American League MVP didn’t set the Major League home run record, regardless of what you may argue, but he still had an absolute monster year,

Judge set both an AL and New York Yankees single-season record with 62 home runs, He .311 with a jaw-dropping 131 runs batted in. Judge also dominated the advanced metrics. His 10.4 offensive WAR was nearly three wins higher than second-place Paul Goldschmidt with 7.5. He posted a 211 OPS+, 24 points higher than Jose Altuve in second. And his WRC+ of 207 was 22 points higher than the next eligible player, Yordan Alvarez at 185.

But Judge floundered in the playoffs as the Yankees struggled. He hit a paltry .139 with two home runs and three RBI in seven games. The Yankees were swept by the Houston Astros in the ALCS and fans began to turn on the once-king of New York.

Judge now enters free agency after failing to agree to a contract extension with the Yankees, and it sounds like he may have played his last game in pinstripes.

The Astros topped the Yankees 6-5 on Sunday night to eliminate them from the postseason. Reporters immediately asked Judge about his future, and his answer didn’t sound like that of someone who plans on sticking around.

“Getting the chance to wear the pinstripes and play right field at Yankee Stadium, it’s an incredible honor that I definitely didn’t take for granted at any point,” he said. “I always checked myself pregame, when I’d say a little prayer, I’d kind of look around the stadium and kind of pinch myself that there’s very few individuals that get a chance to run out on that field and do that and play in front of the fans that support us throughout my whole six years here. It was a special time. I just kick myself for not bringing home that championship for them.” – via ESPN

While his answer seemed more reflective than anything, he did later refer to the future Yankees as “we.”

“This is never fun, but I think it’ll definitely make, when we finally get there and secure this thing, it’ll make it a lot sweeter, going through the tough times like this, that’s for sure,” Judge said.

Whether he stays or goes, Judge’s next contract is sure to include a lot of commas and a lot of zeroes.