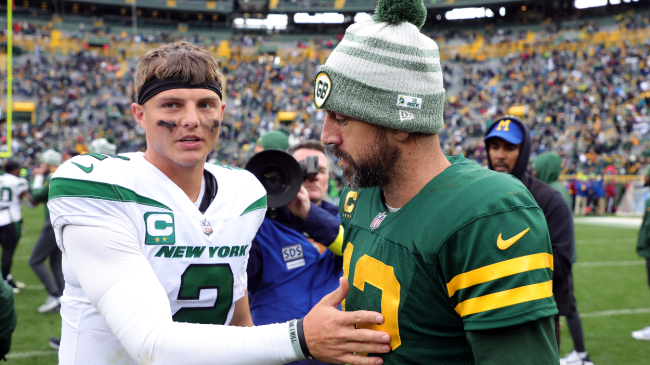 Zach Wilson has struggled over his first two seasons as an NFL quarterback. The former first-round draft pick was benched a number of times this season following poor performances.

Some labeled Wilson as lazy after appearing lost throughout the 2022 season. A recent report from Ian Rapoport reveals quite the opposite.

The NFL insider appeared on the Pat McAfee Show and the topic of Wilson and the Jets came up. He then reflected on a story he’d heard involving Wilson and Green Bay passer Aaron Rodgers.

In that recollection, Rapoport tells of a conversation between the pair in 2021. He then revealed some advice given from Rodgers to the up-and-coming Wilson.

“Rodgers calls Zach Wilson in the summer, and it’s a Friday at like 6 PM. And at some point, Rodgers had kind of helped him with some stuff and given him some advice. At some point he stops, and he’s like, ‘Where are you right now? Are you in the meeting room? You’re in the facility at 6 PM on a Friday in the offseason?’ Rodgers basically told him, ‘Get out of there. You’re going to lose your mind.'”

The funny story actually shows that Zach Wilson might’ve been overworking himself as a rookie. Rather than sit back and learn, he applied added pressure and tried to take in too much, too fast.

I can confirm the story Ian Rapoport‘s telling Pat McAfee —It hasn’t worked out for Zach Wilson. But it’s not for a lack of trying, either on his part or the Jets’ part.

While Zach Wilson’s work ethic was the main takeaway from the story, the advice was so on-brand for Aaron Rodgers. From someone who steps as far away from football as possible during his downtime, it wasn’t a surprise to tell the rookie to clear his mind.

Wilson’s future with New York will be a topic of conversation throughout the upcoming offseason. We’ll see if he heeds Rodgers’ advice in 2023.