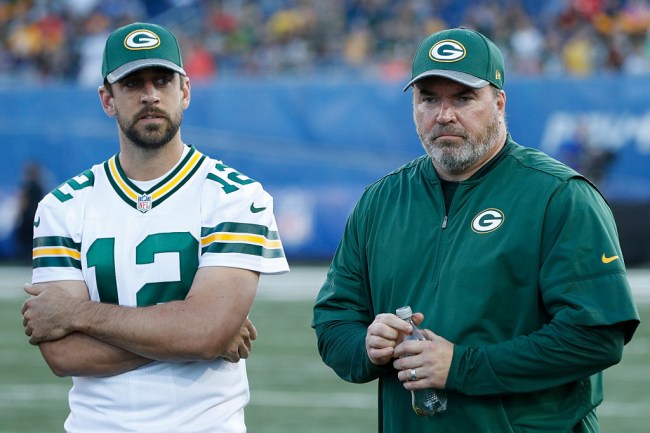 When Mike McCarthy became head coach of the Green Bay Packers in 2006, Crash won Best Picture, Akon released Smack That, and I was trying to find a respectful way to break up with my high school girlfriend before I went to college.

Twelve-plus years later, the 55-year-old’s reign has ended, as team president Mark Murphy fired McCarthy after a 20-17 home loss to the piss poor Cardinals. To add insult to injury, as ESPN points out, it was the first time the Packers had fired a head coach during the middle of a season in the 98-year history of the franchise. McCarthy can hang his hat on a Super Bowl victory back in 2010 and holds a respectable head coaching record of 125-77 (10-8 postseason).

In the lead up to his firing, reports of a disconnect between McCarthy and quarterback Aaron Rodgers began to swirl around sports media. Rodgers was reportedly frustrated with the state of the Packers offense and concerned over some of the staff changes made by McCarthy after last season. Numerous times during the year, Rodgers used his post game press conference to rip the Packers offense, knowing all well it would bring media and organizational scrutiny to the head coach.

Former tight end and Packers Hall of Famer Mark Chmura may have been the most critical of Rodgers in his handling with his head coach, saying he now looks like a “prima donna basketball player in the NBA that wants his coach fired,” while also shining a light on the narrative that Rodgers is a difficult player to coach.

The all-time great quarterback has broken his silence about the firing and emphasized his excellent personal and professional relationship with the only professional head coach he’s ever known.

Packers quarterback Aaron Rodgers touches on his relationship with Mike McCarthy one day after the team fires McCarthy as head coach. pic.twitter.com/9dVCQw3vtd

As Larry Brown Sports points out, Rodgers said he had not yet reached out to McCarthy as of Monday afternoon, but he planned later in the day.

Rodgers on McCarthy: "We spent a lot of times here talking off the field, in my house, in his house. We spent time together and growing our friendship and we accomplished a lot together."

It will be interesting to see how, at 35 years old, Aaron Rodgers assimilates to a new coaching style. Will he be able to silence critics who point to his lone Super Bowl victory as a skid mark on his career? Only time will tell.