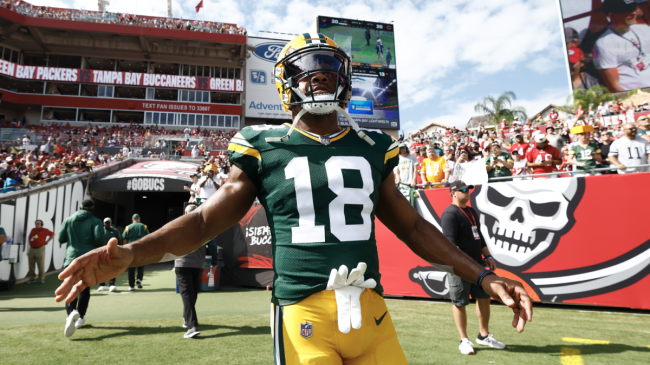 Aaron Rodgers convinced the Packers to sign one particular offensive playmaker in 2021. Now, he’s trying to convince them to get that playmaker more involved in the gameplan.

The veteran has been in the NFL for more than a decade, spending the majority of that time in Green Bay with Rodgers. The team made a trade for Cobb in the 2021 season, mostly to appease their franchise quarterback, who requested that the Packers pick up the wideout.

But just having Cobb on the roster isn’t enough to keep Rodgers happy. He’s now telling coaches that he needs to be a focal point in the offense, and he’s probably right.

Cobb opted to take a slight pay cut in 2022 to remain with the Pack, and it is now paying dividends.

Cobb is averaging a team-high 15 yards per catch, ranking third on the team in receiving. The Green Bay wide receiver room is largely unproven, with its top three pass catchers including Romeo Doubs, Allen Lazard, and Robert Tonyan. Cobb has more than doubled the production of those three players, combined, over the course of his career.

Rodgers believes that the vet has earned the right to more playing time, and he’s begging the coaching staff to shake up the WR rotation.

He was seen on the Pat McAfee show making his case to head coach Matt LaFleur.

“I really feel like he needs some more playing time. He’s made plays in every game that he’s played. He had two huge plays [in last week’s game], both on third down… I think he needs more opportunities, for sure. He’s earned them. Big Kudos to him… He’s earned the opportunity that he’s gotten, and probably more. I look forward to some more snaps for him, because every time he’s out there, he’s making explosive plays.”

I mean, you can’t be any more obvious than that. Rodgers wants to see more Cobb, and typically with the Packers, what the QB wants, he gets.

Green Bay’s wide receiver woes have been well documented this year. Look for Cobb to have a bigger role in the offense moving forward as the team looks for a more consistent threat in the passing game.