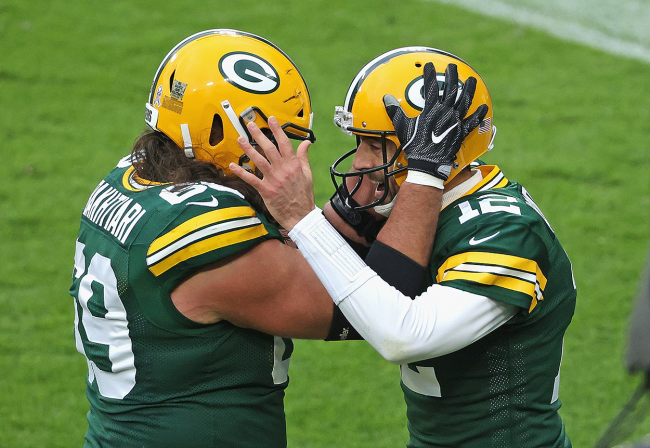 Aaron Rodgers has yet to make a decision on what he wants to do in 2022. He could choose to retire, play out the final year of his contract in Green Bay, sign an extension with the Packers, or request a trade.

The general consensus is that the reigning NFL MVP will return to Wisconsin for next season. However, should he be as “torn” as many think, he reportedly has a shortlist of teams that he would want to play for next season and already has trades lined up.

As for when Rodgers could decide on his future, there is no telling. But the expectation is that he will give Green Bay a definitive answer by Tuesday of this upcoming week.

In the present, he is currently playing a big role in one of his teammate’s life.

According to Michael Silver of Bally Sports, the 38-year-old quarterback is currently in California to officiate a wedding. Packers left tackle David Bakhtiari is getting married.

Rodgers is set to marry him.

Today Packers LT David Bakhtiari is getting married in California. Aaron Rodgers is set to officiate it. Matt LaFleur will be there. Rodgers is likely to tell the Packers what he wants to do by Tuesday afternoon. Timing is kinda wild.

The dynamic of the wedding is certainly unique. Rodgers will be standing in front of everybody, pronouncing Bakhtiari and his fiancée as man and wife.

Meanwhile, his head coach of three years and many of his and Bakhtiari’s Packers teammates will be watching without knowing whether Rodgers will be with them next season or not. No matter what terms that Rodgers, LaFleur and Green Bay are on, it has to be just a little bit weird.

Will LaFleur go up and talk to Rodgers at the buffet? Will they choose to ignore one another? How will they interact under the undeniable, looming tension of the upcoming decision?

Both Rodgers and LaFleur seem like pretty down-to-earth people who understand that adults are adults, so there probably won’t be any awkwardness. But maybe just a little, right?