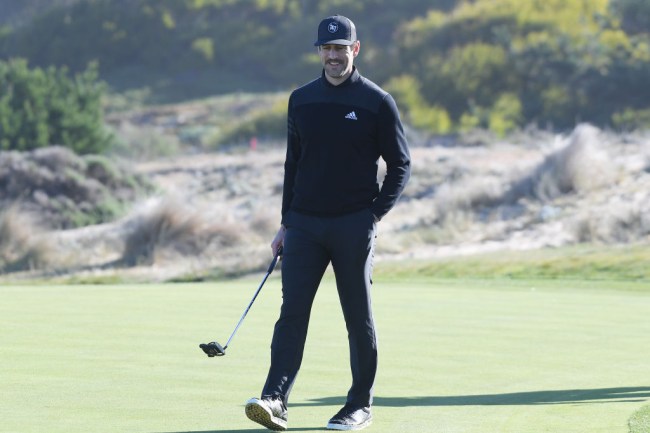 Aaron Rodgers, along with a number of other professional athletes and celebrities, is teeing it up this week in the AT&T Pebble Beach Pro-Am.

Go figure, but Rodgers is a stick. His handicap hit a low of 3.5 last year and while that may not be the best handicap among amateurs out at Pebble this week (looking at you Matt Ryan and Tony Romo) he’s still a good player.

Rodgers and professional partner Max Homa put together a strong round on Thursday carding an 8-under 64 at Spyglass Hill and Rodgers showed some serious sauce with his Million Dollar Hole-In-One For Charity shot.

"Aaaron, this is some shot!"

Aaron Rodgers' shot settled at just over 4 feet from the hole. pic.twitter.com/zlgDzwV5q9

Sure, it was a bit of a leaky shot and he may have gotten a bit of a lucky bounce in the end, but nevertheless, that’s a golf shot.

His tee shot at the Par 3 wasn’t the highlight of the round though, at least not in the confidence department. After a quality tee shot at the 5th, Rodgers showed that he’s good with the flat stick as well. Before his ball was even halfway to the hole, he started walking after it as it found the bottom of the cup.

The early walk from @AaronRodgers12. 😳 pic.twitter.com/gYrmKdXo2f

Who knows, maybe he thought he hit a bad putt and his ball was going to slide by, but it fell and the early walk is always a badass move. It’s no secret that Rodgers is a confident dude out on the field and it sure seems like that carries over to the golf course as well.