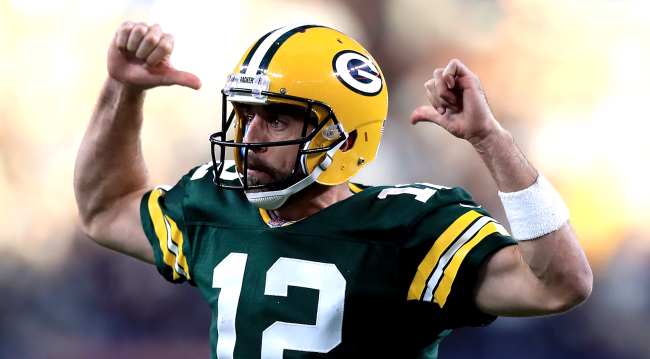 Famous celebrity quarterback Aaron Rodgers has announced a new partnership with actor and producer Ryan Rottman (best known for his role as Joey Colvin on the TeenNick series Gigantic) to form a new website called Online Sports Database (OSDB) – the sports version of the Internet Movie Database or IMDb.

“Not only the fan side, but we want to be able to help generate additional [exposure] for these guys, “Rottman told ESPN this week. “We’re not building this for 1 percent; we’re building it for the 99 percent who don’t get the eyeballs, or people don’t know how to get ahold of them for deals where they can endorse, say, the local car dealership in Green Bay.”

To get the new part free/part subscription-based website off the ground, Rodgers (career earnings: $240,943,304) and Rottman say they raised $2.5 million in capital from investors.

The OSDB website states it is “a digital sports platform with the most extensive sports information on the web. How much do you really know about your favorite athlete? Do you know their personal interests, business ventures, charities as well as all their stats? Are you a brand looking to get in contact with an [athlete’s] agent or manager?”

Fans will also supposedly be able to send emails to their favorite athletes in the NFL, NBA and Major League Baseball.

“One cool thing about sports fans is everyone is looking for something different, and we have everything collectively in one place,” Rottman said. “On the player’s profile, you’ll see their contract details, you’ll be able to see their business ventures and really showcase who they are more than just an athlete. You look at Aaron’s page, and it’s mind-blowing how much he has going on. Steph Curry has production companies. Cole Beasley has a rap album. Thaddeus Young has like 80 different business ventures he’s involved in. Cassius Marsh has a card store; he’s really big into magic cards and opened his store. Guys have podcasts. That, to me, is what’s really engaging. Our next step will be to hyperlink all of that.”