The Absence Of Tiger Woods And Phil Mickelson Helped The U.S. Win The Ryder Cup 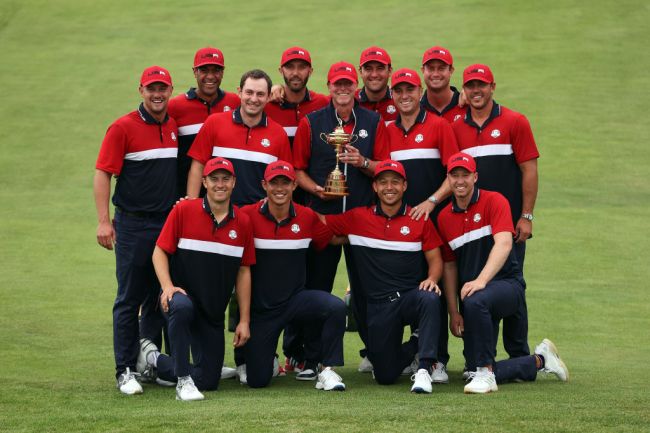 Tiger Woods is the greatest golfer of all time and Phil Mickelson is one of the 10 best players to ever tee it up. While they’ve been members of some special Ryder Cup teams in the past, the fact that neither of them was a part of the team at Whistling Straits actually helped this group of 12 Americans get the job done.

This year’s Ryder Cup marked the first time since 1993 that neither one of Woods or Mickelson was on the team. It’s not a coincidence that this U.S. team without those two went on to slaughter the Europeans 19-9, marking the biggest winning margin since the event’s modern era began in 1979.

It’s not Mickelson and Woods’ absence from a pure golf standpoint that benefitted this team, it’s their sheer lack of presence that made this year’s Ryder Cup a bit more easy-going and had this team feel like, well, an actual team.

Any room that Woods walks into, he’s going to unintentionally demand every bit of attention. The same can be said for Mickelson and his more outgoing personality, and when you put the two of them in the same room, especially around players that grew up idolizing them, and it becomes nearly impossible for a true team dynamic to form.

Instead of having two of the greatest American golfers of all time dictating things just off of their presence alone, you have the opportunity to have a more unified group, which is exactly what we saw form in Wisconsin over the weekend. You also have to tip your cap to team captain Steve Stricker for not only coming up with a great game plan but for allowing this team to simply be themselves and not getting in the way of their own processes.

Brooks Koepka even said following his singles match on Sunday that this Ryder Cup was “a lot more fun than in years past,” and he wasn’t the only American to share that sentiment during the week.

It feels like a true changing of the guard for American golf took place on Sunday.

Barring some sort of movie-like comeback from the Europeans, the event was already over before the first singles match even hit the course on Sunday morning. You could argue that the Americans had the event won before Saturday’s afternoon session even began, to be honest.

Instead of the Americans lulling themselves toward a victory, they were chasing 20 points, many of the players admitted it during their post-match press conferences. They didn’t quite get there, but they were still able to notch a new line in the history books.

This was a group of 12 golfers where nearly 90% of them grew up playing golf together. They’ve been forming these bonds for over a decade and it all came full-circle on Sunday evening.