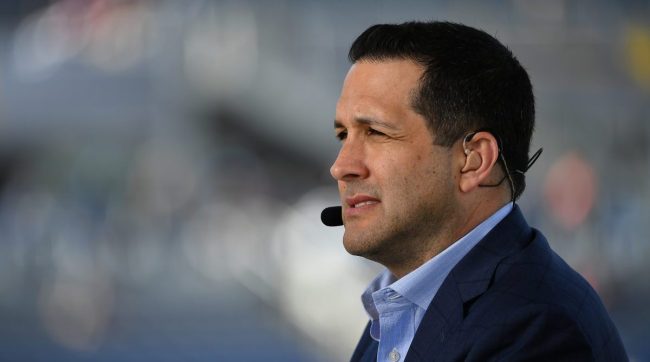 Generally speaking, people who say the refuse to eat pizza from any of the big three pizza chains are lying. Not only are they lying to you and me, but they’re also lying to themselves.

Sure, Pizza Hut, Domino’s and Papa John’s aren’t the peak of the culinary world. But it’s sauce and cheese and likely your favorite toppings stacked on top of bread for a relatively cheap price. Stop lying, you’re going to eat it and you’re going to like it. You can always just douse it in your favorite hot sauce or ranch.

But then there’s….whatever this monstrosity is supposed to be.

ESPN NFL Insider Adam Schefter revealed his latest endorsement on Monday morning, and the world really wishes he wouldn’t have.

What’s it’s supposed to be is a delicious delivery pizza that is for some reason shaped like a football. What it actually is appears to be a rugby ball-shaped pizza-adjacent food item. For one, there appears to be far too much pepperoni on this thing. Then there’s the laces which I think are made of what’s supposed to be cheese that’s burnt, but could also be mushrooms.

Whatever it is that Schefter just introduced to the world, the rest of Twitter wasn’t having it.

Doing this was a life choice. https://t.co/O6kjheL6cl

Adam please disclose how much you were paid to partner with this brand. Whatever it is, it wasn’t enough. https://t.co/DDdjDNTPMW

Schefter hilariously followed the disgusting pizza promo up, then sharing a brutally depressing tweet about life as a fringe NFL player.

Over the next two days, 864 players will be released. Some will be brought back for practice squads, some others will catch on with another team, but for many this could be the end of their football playing days.

Maybe the 864 players that are going to be jobless by Wednesday can drown their sorrows in a football pizza. Or who knows, maybe the pizza will now become part of Schefter’s ridiculous Christmas list.