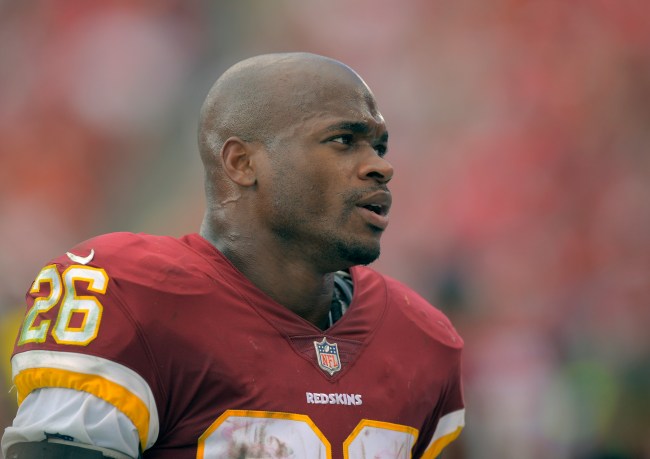 Adrian Peterson is one of the best running backs in NFL history, currently sitting No. 8 on the league’s all-time rushing list, with a good chance to move all the way up to the sixth spot by the time the 2019 NFL season is over. And, while it isn’t quite “All Day” as much these days — the nickname he was given decades ago for his ferocious running style and next level power and speed — Peterson is still a serviceable running back who just so happens to be stuck in the shitshow called the Washington Redskins.

While Adrian Peterson’s football career will be remembered for being one helluva of a player — along with that unfortunate child abuse incident years ago — one of his former teammates from the Minnesota Vikings, offensive lineman Alex Boone, will remember Peterson for something else: being self-centered and putting blame on others in the locker room. Hell, Boone even said that Adrian Peterson was “the definition of why you shouldn’t meet your heroes.” Yikes.

Speaking to Purple Daily with Matthew Coller on SKOR North on 1500, Boone, who played with Peterson on the 2016 Vikings, didn’t hold back in criticizing his former teammate. The full rant is below, which includes Boone comparing AD’s lack of leadership with Frank Gore’s impeccable leadership.

“Adrian Peterson to me was the definition of why you shouldn’t meet your heroes. Ever. And I’m a firm believer of that because after I had met Adrian I was so disappointed. I had played with Frank Gore for so long and I had known Frank and the way he was and every single day he was going to show up at 5:30 (a.m.) and be there to get work done on his legs and workout.

“He knew that if guys saw him there at 5:30 and didn’t see him leave till 9 at night they would take that (to mean) they had to be there. He was so right and I loved Frank for that because he made a team that was an average team so much better. Adrian was the opposite. Adrian was a very self-centered player and it bothered me. Not only that but to have your dad throw shade on us the year after you leave. Dude are you serious right now?”

When the host of the show, Judd Zulgad, brought up the fact that, in 2016, Adrian Peterson fought through injuries after knee surgery to return to the field in a critical late-season game against the Indianapolis Colts, Alex Boone shot that down, too, claiming Peterson blamed his offensive line for his terrible performance, where the running back only had 22 yards rushing and lost a key fumble in the red zone.

“I know that no one ever has talked about this and I know it’s never come up. I’m going to tell you right now that that Colts game, he should be embarrassed for himself for how he played and how that game ended. I’m not kidding you. I’ve never been around an NFL player that I was so embarrassed for and ashamed of at the same time. I was like, ‘Dude, are you really being for real right now?’

“He pulled himself out of the game. He ran the wrong way on a power and fumbled the ball and blamed it on the (offensive) line. He was like, ‘It’s your fault, it was the o-line’s fault.’ Dude, you left in the first quarter. Like what? Where were you? We started to mount a comeback.”

Who knows if Alex Boone’s critical comments are accurate, or if he just has something personal against Adrian Peterson? But with the running back set to make his return to Minnesota this weekend, it’s an intriguing storyline from Peterson’s days as a Viking legend; even though Boone himself isn’t even in the league anymore.