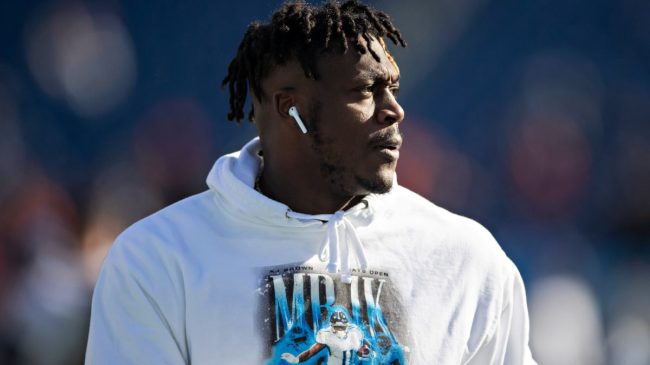 Star wide receiver Deebo Samuel has finally landed his new deal with the San Francisco 49ers. The pass catcher received a three-year contract extension on Sunday meaning he’ll be tied to the team for the foreseeable future.

“Sources: The #49ers and star weapon Deebo Samuel are in agreement on a massive contract extension, keeping him in SF for the foreseeable future. The drama is over, the bridge is rebuilt.

Samuel’s deal pretty much wraps up a wild offseason of wide receiver free agency. We saw AJ Brown, Terry McLaurin, and DK Metcalf all receive new contracts. On top of that, stars Davante Adams and Tyreek Hill were traded to new teams.

But for San Francisco, they were able to keep their playmaker.

Samuel led the team in both receiving and rushing scores last season as the 49ers went to the NFC title game. He became the first player in league history to record 1,400 receiving yards and 300 rushing yards in a season.

There was certainly some off-field drama with Samuel at one point deleting all affiliation with the team on social media. There was a public battle between him and the front office over the summer, and the receiver even asked to be traded. But when all was said and done, both sides won.

With Deebo back, the Niners are a threat in the NFC once again.

While most are happy to see Samuel getting paid, there’s one wideout that still seems bitter about the way things worked out for him this offseason.

Wide receiver AJ Brown was one of a quartet of pass catchers involved in offseason contract negotiations. We mentioned Brown, Terry McLaurin, DK Metcalf, and Deebo as being players in free agency battles this summer.

All four landed similar deals, ranging in the $71-73 million range along with a hefty guarantee, but Brown was the only player to be traded.

Instead of paying Brown, the Titans dealt him to the Eagles during of the NFL Draft. While he’ll now move on to an NFC East contender, he still seems bitter about how things worked out.

Here’s what he posted after the Samuel news broke.

Basically all 4 of us got the same contract and I’m the only one got traded… yeah keep believing it was me . Anywho Go Birds 🦅 #CarryOn

Brown was the first of the four players to receive a deal, and at the time, many believed his asking price to be high. Titans’ fans turned on him as they viewed his actions as selfish rather than working with the team to make it work.

Now, he’s asking fans if they still feel the same.

Brown’s deal set the bar for wide receiver deals this offseason, and now that the rest of the dominoes have fallen, maybe it’s the Titans who should be blamed for the split. He took some time to spotlight that notion and throw some shade at his former team.

It should be interesting to see how each side fares in the 2022 season. The Eagles and Titans match up against one another in Week 13.