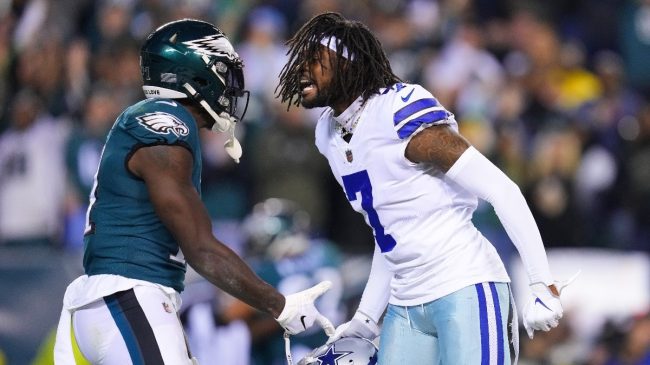 Sunday Night Football between the Philadelphia Eagles and Dallas Cowboys was a solid battle. However, all eyes were on AJ Brown and Trevon Diggs, as the two superstars were seen in a heated argument. Now, Brown addresses the situation and opens up about what transpired on the field.

According to Jeff Kerr, the Eagles superstar downplays the entire conversation. AJ Brown claims it was nothing more than Trevon Diggs “trying to apply his dominance.” He goes on to say, “but I wasn’t going for it.”

“Guy was trying to apply his dominance, but I wasn’t going for it.

Trash-talking happens all the time in every sport. Even Nick Sirianni delivered some verbal blows at Dallas at the end of the game. Regardless, things looked a bit heated between Brown and Diggs. However, we have to take the Eagles wide receiver for his word, as he doesn’t seem bothered by the altercation with the Cowboys star.

If anything, this could be the beginning of a thrilling rivalry between the two. They’ll be facing each other often throughout their careers, as the Eagles and Cowboys play each other twice every season.

Even so, trash-talking is all fun and games, but it’s walking that’s most notable. On Sunday night, it appeared AJ Brown got the best of Trevon Diggs. He proved to be the top pass option for Jalen Hurts, as Brown recorded 67 yards and a touchdown off of five receptions.

Perhaps Trevon Diggs can seek his revenge later in the season when the Cowboys face off against the Eagles again. For that reason, make sure to have your popcorn ready on Christmas Eve, as their next matchup will surely have more on the line with the playoffs looming.