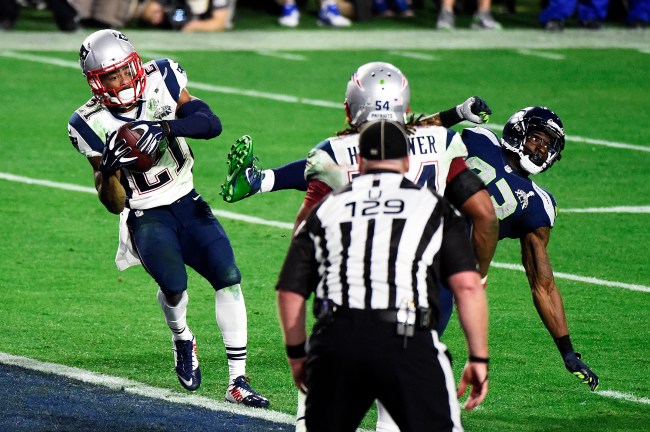 Before Malcolm Butler became a Patriots legend and etched his name in Super Bowl folklore for all eternity, he was a “good employee” at Popeyes Chicken in  Vicksburg, Mississippi. The Division II star and undrafted rookie made one of the biggest plays in Super Bowl history, picking off Russell Wilson at the goal line and securing an unlikely Patriots win.

Al Michael’s displayed his second-to-none announcing abilities when he perfectly encapsulated the drama of the moment with quick-thinking delivery. He was immediately able to decipher Butler, who before that play, was by no means a star. Michaels claims that the explanation for his authentically flawless call on the play was due to Malcolm being involved in a play moments before.

He said, via For The Win:

“Had he not been involved, I might have been able to make the call like I did, I don’t know,” Michaels says. “But the one thing I did know was when they lined up for that play, I really took a quick look at who’s lined up with whom. If Marshawn Lynch had gotten the ball, he would have been easy to identify getting the handoff. But I remember looking at the receivers and trying to match them up in my brain with the defensive backs and I can’t say that I actually thought about Malcolm Butler’s name but I saw where (Tyler) Lockett had lined up, I saw where Darrelle Revis was as the defensive back. And I knew they probably wouldn’t go to him.

“I think he was on (Doug) Baldwin on the left side. So I was looking at the right side and I saw the two guys there. I think I might have — I can’t say consciously I said to myself ‘this is Butler’ because this is all going by very quickly — but he was enough of a factor a couple of plays before that I was able to pull that one out quickly.”

Michaels will be joined by Michelle Tafoya  and color commentator Cris Collinsworth on Super Bowl Sunday. It will be his  his 10th Super Bowl, tying Pat Summerall as the only play-by-play announcer to work that many games.