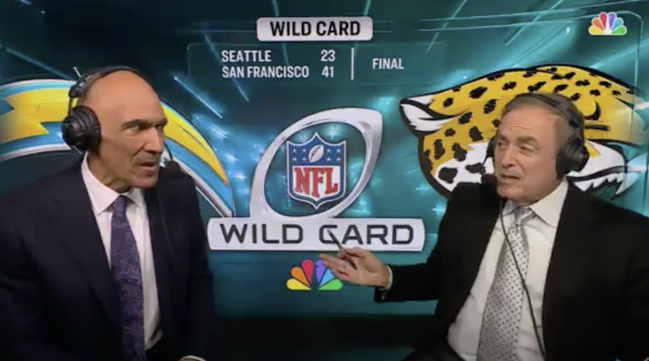 On Saturday night, one of the great comebacks in recent NFL history took place as the Jacksonville Jaguars came back from being down 27-0 to beat the Los Angeles Chargers by a score of 31-30. If you were only listening to the commentary from Al Michaels and Tony Dungy, though, you’d be forgiven for thinking otherwise.

During and after Saturday night’s Wild Card game between the Jags and Chargers, NFL fans ripped veteran play-by-play man Al Michaels and Super Bowl-winning analyst Tony Dungy for their droll tone and general lack of enthusiasm throughout the game.

Mike Tirico with more enthusiasm on one play that Al Michaels and Tony Dungy had on every play last night combined pic.twitter.com/r3db3sSpDi

never heard a more comatose call on a huge play, get these guys some coffee, this is just a completely LOUSY booth pic.twitter.com/cDSt4f9DzR

3rd biggest comeback in playoff history and legit Al Michaels and Tony Dungy may have taken a quick snooze during the final kick. I can’t even think about the game. I’m too furious with the announcing job. #jags pic.twitter.com/QGzJ9mFMWM

Not only were Michaels and Dungy subdued in general, but their comatoseness was only further exasperated by the fact that they were calling one of the greatest playoff comebacks of all time.

Tony Dungy and Al Michaels were calling the game like they had to be quiet because their parents were in the other room sleeping pic.twitter.com/LcvKGEbt9Z

As disgusting and shameful as that Chargers loss what was worse was the decision to have Al Michaels and Tony Dungy destroy one of the greatest comebacks in playoff history. They were abysmal. Completely disinterested and lame as any announcing duo in history.

While clunky analysis is something fans have come to expect from the perpetually awkward Dungy, the energy of Michaels was particularly shocking considering he spent most of the season calling terrible Thursday Night Football games for Prime Video.

Live look at Michaels and Dungy during one of the most exciting postseason comebacks in NFL history pic.twitter.com/vat8Lv843G

In addition to the Jags’ epic win over Justin Herbert and the Los Angeles Chargers, the Wild Card round also featured the Buffalo Bills beating the Miami Dolphins by three points and the Cincinnati Bengals besting the Baltimore Ravens by seven points.

Over in the NFC, the San Francisco 49ers cruised past the Seattle Seahawks while the New York Giants upset the Vikings in Minnesota. On Monday night, Tom Brady and the Tampa Bay Bucs will host Dak Prescott and the Dallas Cowboys for the final Wild Card weekend matchup.