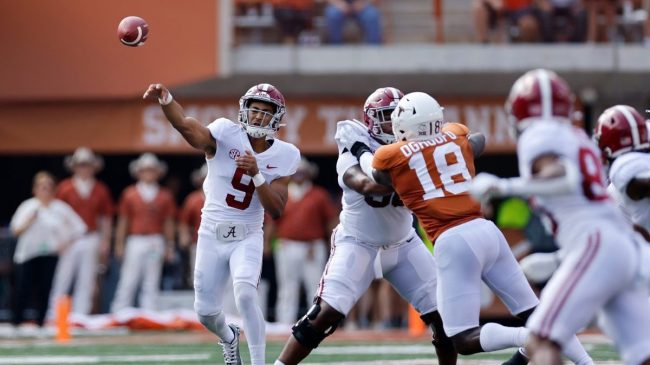 The Longhorns played host to the Alabama Crimson Tide on Saturday in perhaps the most-anticipated game in Texas football history.

Texas shoved a record 105,213 fans into Darryl K. Royal-Texas Memorial Stadium. Some fans even ended up getting turned away at the gate.

The Longhorns and Crimson Tide battled throughout the game, with the hosts showing early on they wouldn’t roll over. But then star freshman quarterback Quinn Ewers was forced to leave the game on a hit that some Texas fans called dirty.

Even that couldn’t shake the Longhorns’ resolve, however. Texas appeared to take the lead in the third quarterback, but a controversial call kept it tied.

Eventually, the Longhorns nudged in front with on a Bert Auburn 49-yard field goal with just 1:29 left on the clock. That had home fans feeling good. But on the other side stood reigning Heisman Trophy winner Bryce Young.

Bryce Young Puts The Alabama Crimson Tide On His Back

Young quickly and methodically marched the Crimson Tide into Texas territory with still a minute left on the clock. With 35 seconds remaining and Alabama stationed at the Longhorns’ 37-yard line, Young made the play of the game.

The junior evaded the unblocked blitz of Texas defensive back Ryan Watts. He then stuck his foot in the ground and took off for a 20-yard run to put Alabama in the red zone.

That led to a Will Reichard 33-yard game-winning field goal with 10 seconds remaining and the Crimson Tide escaped Austin with their perfect record in tact.

College football fans were in awe of Young’s play.

BEST IN THE COUNTRY https://t.co/h0hMJ6YINd

If that sack was made! Game would’ve been over! https://t.co/p6XDlvhPuT

The Longhorns may not have picked up the win, but they showed themselves admirably. Young, meanwhile, showed why he may well be the No. 1 pick in the 2023 NFL Draft.