Troll Tide! Alabama Fans (Or People Posing As Them) Actually Called For Nick Saban’s Firing After Loss To LSU 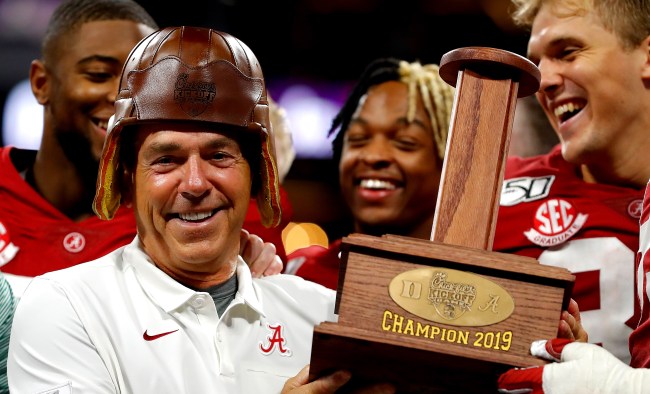 I didn’t think there could possibly be a football fanbase more insufferable than the New England Patriots’ fanbase. I may have been wrong.

After seeing the reactions of several alleged Crimson Tide fans following their 46-41 loss to the #1 ranked LSU Tigers, the University of Alabama may have an even more entitled fanbase.

I say that because, as hard as it might be to believe, some fans actually called for the school to fire head coach Nick Saban.

Yes, that Nick Saban. The one who is now 149-22 (87.1%) with five national championships as the head coach of the Crimson Tide (plus one more at LSU) and is widely viewed as the greatest college football coach of all time.

The loss to LSU was Alabama’s fifth defeat under Saban – in the last five seasons – so it’s completely understandable that Alabama fans would be calling for his head, right? Not.

This is the equivalent of Patriots fans saying Bill Belichik should be fired because New England lost to the now 7-2 Baltimore Ravens.

And speaking of the Baltimore Ravens, their star running back Mark Ingram (Alabama 2008-2010) blamed President Trump being in attendance at the game on Saturday for the loss. And his take was one of the more reasonable ones following the loss.

This is not Alabama football. Nick Saban has lost complete control of the program and needs to be gone ASAP! Bring in Dabo and #FireSaban

I just left Bryant-Denny with an awful taste in my mouth. I’m afraid this is an end of an era, and the end of my donations. We need to move on from Nick. #FireSaban

Haven’t seen an Alabama team play this bad since 1980 when I went to games with my dad. Saban has got to go #FireSaban

I've spent well over 100k on bama in my lifetime, and through 30 years of being a die hard bams fan, I've never seen anything as atrocious as this team. Everyone was right, we were just playing cupcakes. Time for nick to go. #FireSaban

This is ridiculous. Enough is enough. Pull the trigger @AlabamaFTBL #FireSaban

That defensive performance was the worst by Nick Saban in his entire career… it's clear that he's over the hill at this point, and I think the Crimson Tide family deserves better. #FireSaban before it's too late and he costs us another championship!!

If Bama gets blasted at home, combined with the lopsided Clemson loss, they’ll get the rep of beating up cupcakes and losing to big teams… maybe it’s time for a coaching change. #FireSaban #GetMikeLeach #LaneKiffenForBamaCoach @ESPNCFB @CFBHeather

I’ve been a season ticket holder since 98 and I’ll be damned if I have to deal with shit again! #FireSaban

I legitimately read every #FireSaban tweet like it’s a joke. Am I right or are they actually that stupid?

I am putting it at 50-50 on people making jokes versus legitimately angry Alabama fans wo actually want to see the man fired. Or am I giving Crimson Tide fans too much credit?

#FireSaban is the best troll hashtag of the day.