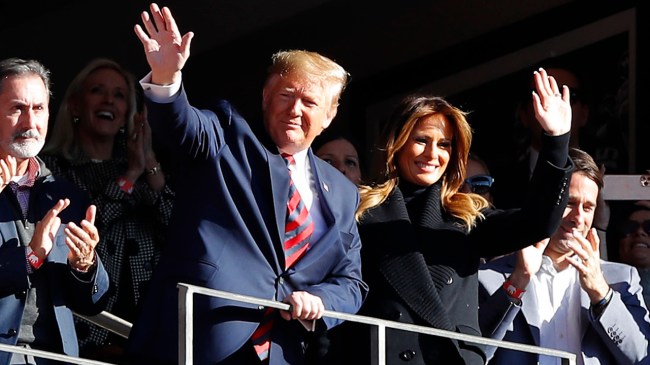 Let’s start this fine Monday morning off with a little fun fact: did you know that the Alabama Crimson Tide football team had won 31 (yes, 31) straight games at home prior to Donald Trump showing up at this weekend’s game in Tuscaloosa? As the kids say, ya just haaaatteeeeee to see it.

President Trump — who was attending his third major sporting event in as many weeks in a desperate and transparent attempt to be adulated in public (the first two tries at the World Series and UFC 244 didn’t go as well) — waddled his Cheetos-skinned ass all the way down to Bryant Denny Stadium only to watch the Crimson Tide be effectively manhandled by Joe Burrow, Ed Orgeron, and the Louisiana State University Tigers. Once again, as the kids say, ya just haaaaattteeeeeee to see it.

And while the internet obviously had their fun conjuring coincidental conspiracy theories about Bama’s poor play in front of the President, there is one former Crimson Tide running back who is placing the blame squarely on Trump’s brittle shoulders, and that’s former Heisman Trophy winner Mark Ingram.

Ingram, who is currently in the midst of one of his best seasons as a pro with the Baltimore Ravens, took to Twitter to point out that the Crimson Tide “had that bad swacky” after the cameras cut to the political orange Teletubby.

I’m blaming Trump for this one. Soon as they showed him at game we had that bad swacky!!

While the Urban Dictionary definition of swacky doesn’t provide much more insight into what the word actually means, the simple tone of Ingram’s tweet tells you all you need to know about what the word *probably* means. And it ain’t good — just like the Tide’s performance in front of Trump.