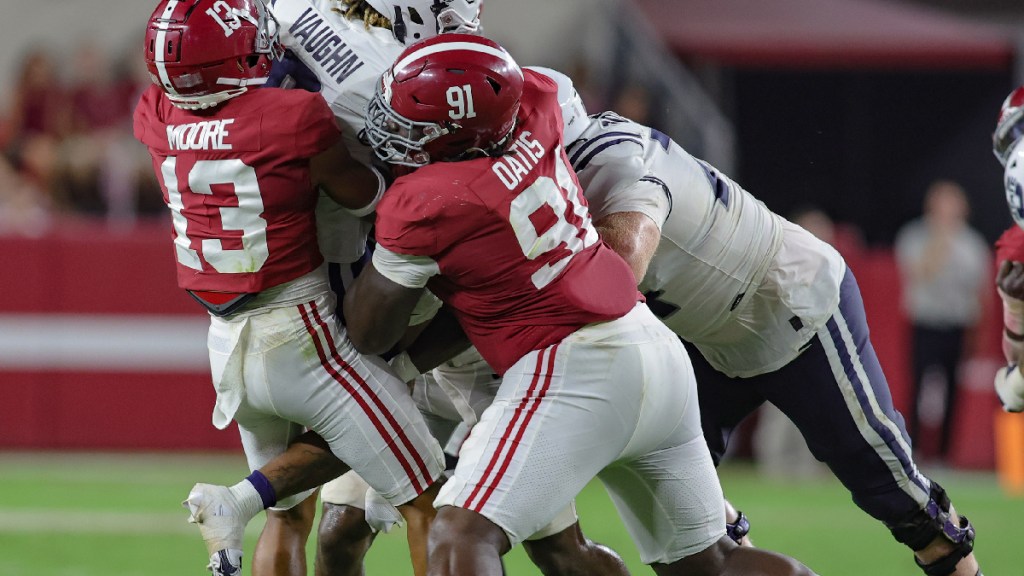 Alabama Crimson Tide’s freshman DL Jaheim Oatis has had a wild ride to this point in his career. Heading into his 8th-grade year, Jaheim Oatis was bigger than most men will ever be and stood 6’4″ weighing 286 pounds.

According to the current ‘percentile chart’, most 8th Grade boys weigh 100 pounds. He was literally almost three men by the time he was in 8th grade. From there he continued to get bigger until reaching 416-pounds! He’s since cut down to 342-pounds and counting, according to this tweet from July:

If there is one freshman on Nick Saban’s roster that completely embodies the phrase ‘ABSOLUTE UNIT’ it is Jaheim Oatis. And that was reinforced during Alabama’s 55-0 rout of the Utah State Aggies.

This replay footage has gone viral showing Jaheim, a freshman, taking out FOUR OFFENSIVE LINEMEN by himself.

You can see Jaheim Oatis lined up just to the left of the Utah State’s Center at an angle. The line quickly condenses and crumbles with the front 3 of the OL coming together, all getting absolutely dominated by Jaheim who then shoves those three into the 4th lineman and takes all of them out.

Meanwhile, 47 has his man wrapped up just to let him go to get bowled over by Oatis. 47 then sidesteps the line and there’s a wide-open gap and he’s just standing there doing nothing as the running back glides on by him to the left.

So while this is an incredible replay for Jaheim, I have to think that Nick Saban’s crew won’t be too pleased with #47 for getting fooled like that. But that’s only one explanation, the other is he couldn’t have anticipated that Jaehim would knock over the entire offensive line:

Over pursuing because he didn’t expect Jaheim to take out the entire dang offensive line!

The #1 ranked Alabama Crimson Tide will now travel to face the Texas Longhorns in Week 2. Sadly, this season won’t even have a chance to get those ‘Texas is Back’ jokes rolling because Alabama will likely flatten the Longhorns in the 1st quarter and never look back.

As a good CFB fan I’ll be rooting for a competitive game, it’s the absolute most we can realistically hope for in this matchup…

Currently, there isn’t much standing in the way of the Alabama Crimson Tide Football Team and Nick Saban winning another National Championship. Sure, they’ll have to navigate the SEC and College Football Playoffs but they were 13-2 last season in a ‘rebuilding year’.

Experts have the Crimson Tide at just +180 to win the College Football Playoffs this season. In the past 21 years, only two teams have had better odds at winning it all than this squad and one of them was the 2018 Alabama team, the other was the 2005 USC squad.